After Bombshell, Obasanjo Eats Breakfast with Jonathan in Kenya 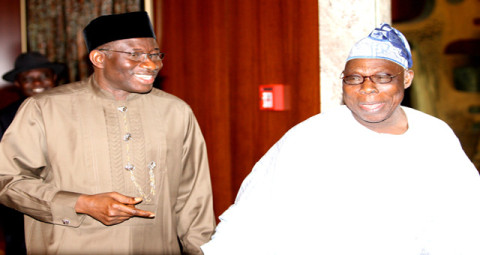 Less than 24 hours after he released to the media a controversial letter which has gone viral on the internet, Nigeria’s former President Olusegun Obasanjo paid a surprise visit to President Goodluck Jonathan in Kenya where both leaders met and had breakfast together. 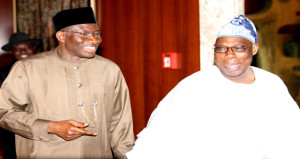 President Jonathan and Ex-President Olusegun Obasanjo exchanges banters when the going was good.

African Examiner gathered that President Goodluck Jonathan and his aides were shocked to see Obasanjo showed up to see the president at the Intercontinental Hotel, Nairobi few hours after releasing his bombshell letter.

Reports say Obasanjo thus had a Private breakfast with Jonathan and he left.

President Goodluck Jonathan and former president Olusegun Obasanjo were among other African leaders that graced the 50th Independence Anniversary celebration of Kenya.

At the venue of the event, Obasanjo sat quietly and was making calls on his mobile hand set at interval while the event lasted.

Recall that Ex-President Obasanjo on Wednesday wrote an open letter to President Jonathan accusing him of protecting corrupt officials and providing shield for criminals, an action in which he said was capable of destroying the country.

In his response through his media aide, President Jonathan described Obasanjo’s letter as self-serving and mischievous. He ordered his aides not join issues with the ex-president but added that he would personally respond to the issues raised in the letter at the appropriate time.