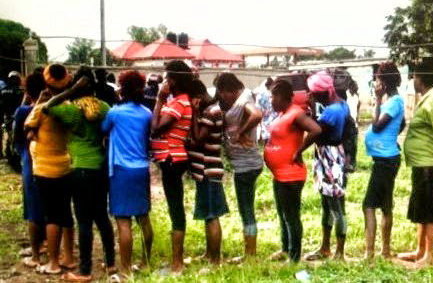 The baby factory is located at Umunkpeyi Nvosi in Isiala Ngwa South Local Government Area of the state.

Also apprehended were six young men, who claimed to be workers of the home, as well as two girls, aged 16 and 25.

African Examiner correspondent gathered that proprietor of the home, Mrs. Nma Charity is still at large.

Investigations by the security men reveal that Mrs. Charity, who claimed to be running a government-approved home, engages in child trafficking and hiring of men who impregnates the teenage girls.

One of the suspects, who was caught at Eke-Akpara in Osisioma Ngwa Local Government Area, while trying to steal a baby, confessed that he had been in the business with Mrs. Charity for a long period.

He disclosed that his role was to steal a child and deliver it to her, who in turn sell it to her customers.

Relying on the confession of the suspect, the Commanding Officer 144 Battalion, Lieutenant Col. Omolori Rasheed, ordered his men to raid the home where about 14 pregnant teenagers and six young men were arrested.

The proprietress of the home was said to be away during the raid.

One of the soldiers who carried out the operation, but craved anonymity, told newsmen that the babies, between the ages of one and six, and the pregnant teenagers, would be handed over to the National Agency for the Prohibition of Traffic in Persons and Other Related Matters, NAPTIP for further actions.