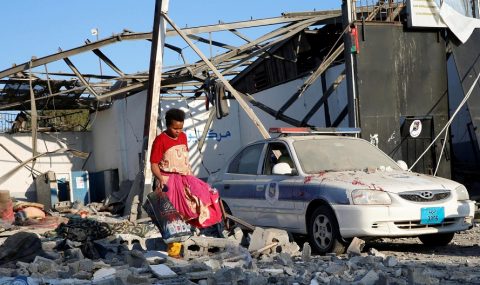 (AFRICAN EXAMINER) – An airstrike hit a detention center for migrants near the Libyan capital of Tripoli early Wednesday, killing at least 44 people and wounding dozens of others in an attack that the U.N. human rights chief said could amount to a war crime.

The Tripoli-based government blamed the attack on forces associated with Gen. Khalifa Hifter, whose Libyan National Army has been waging an offensive against rival militias in the capital of the war-torn North African country since April.

It refocused attention and raised questions about the European Union’s policy of cooperating with the militias that hold migrants in crowded and squalid detention centers to prevent them from crossing the Mediterranean to seek better lives in Europe. Most of them were apprehended by the Libyan coast guard, which is funded and trained by the EU to stem the flow of migrants.

At the United Nations, the Security Council held a closed emergency session on the airstrike in Tripoli’s Tajoura neighborhood, and Secretary-General Antonio Guterres called for an independent investigation.

Hifter’s forces said they were targeting a nearby military site, not the detention center. There also were suspicions of involvement by foreign countries allied with his forces.