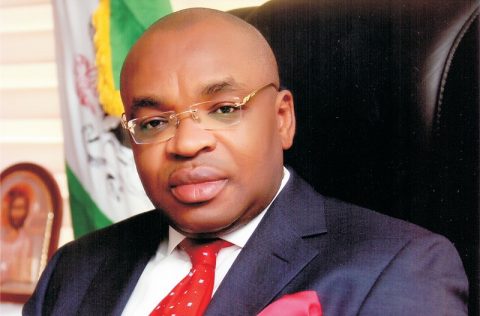 (AFRICAN EXAMINER) – The Akwa Ibom Government says it has intercepted 68 suspected COVID-19 patients at the border, attempting to invade the state.

Governor Udom Emmanuel made the allegation when he played host to State Caucus of the National Assembly in Uyo Sunday.

According to the Governor, they tried to bring in about 68 of them. So you can imagine if they were allowed to come in.

“We got the information on time, so I used the police to intercept them; apart from that, I think so far, the curve has decline drastically,” he said.

“The intelligence gathering approach is deployed by Akwa Ibom Government to mitigate the COVID-19 pandemic.

“The approach has paid off for the state as the technique has enabled us foil the attempt of 68 suspected COVID-19 patients invading the state,” Emmanuel said.

The National Assembly (NASS) members were in the state for a tour of the newly constructed Isolation Centre at Ituk Mbang.

The Isolation Centre was for Quarantine, Prevention and Treatment of Infectious Diseases located within the premises of Methodist General Hospital, Ituk Mbang in Uruan Local Government Area of Akwa Ibom.

The Governor said that it was gathered that the suspects mainly from distant states were liaising with their collaborators within the state to come into the state.

Emmanuel noted that they wanted to take advantage of the robust healthcare system designed to contain the COVID-19 pandemic in the state.

According to him, the graph of the spread of the virus has taken a downward curve indicating a sharp decline in recorded cases of the virus in the state.

“I have text messages where people were trying to communicate with their colleagues here and those colleagues encouraged them to move into the state with the assurance that people are better treated here,” the governor said.

He also said the suspects attempted to enter the state through unconventional borders and were apprehended.

“Yesterday, we got a call from one village in Etinan Local Government Area that somebody has sneaked into the state.

“People even enter through water and when they come in, they declare themselves to be having symptoms so we can pick them up for treatment because they hear testimonies and even calling people to confirm.

“Our Isolation Centre should be as good as where any national assembly person should stay. So, we have tried to make everybody comfortable,” Emmanuel said.

He decried attempts by people trying to invade the state, despite agreement reached at the Governors’ Forum that inter-state borders should be closed to passengers’ movements in the meantime as a measure to limit the spread of the virus.

“In terms of boundaries we are observing what every state in Nigeria is observing, it was agreed at the governor’s forum that we should restrict inter-state passengers movement for now until announced otherwise.

“So, let nobody misunderstand anybody, we don’t want people to start loading luxury buses and transmit the virus, even with that we are still having issues because of our long shoreline,” the Governor said.

He however, assured that the state government would continue to do more towards ensuring a better and robust post COVID-19 economy and medicare in the state.

Sen. Christopher Ekpeyong, representing Akwa Ibom North west, who spoke on behalf of the Lawmakers, said the state representatives in the National Assembly were proud of the State Governor and commended his drive towards mitigating the Coronavirus in the state.

Ekpeyong, the leader of the delegation, expressed delight at the progress of work at the new Isolation Centre.

He commended the proactive disposition of the Governor in healthcare matters, stressing that God placed him on the saddle for times like this as he had been imbued to salvage the state from the the pandemic.

The Lawmakers donated N5 million to the State COVID-19 Management Committee to help in the fight against the spread of the pandemic. /NAN