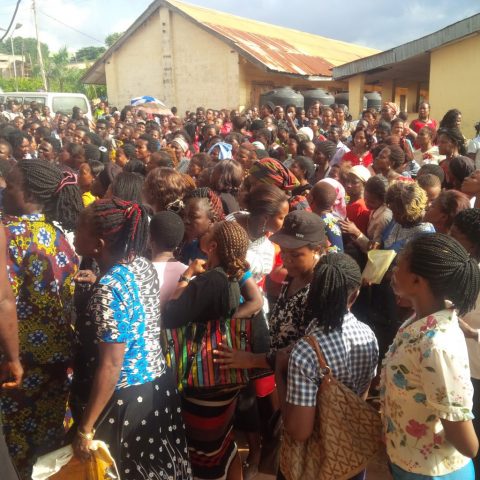 ENUGU NIGERIA (AFRICAN EXAMINER) – The ongoing recruitment exercise of 2000 primary school teachers by Enugu State government is being trailed with the allegation of bribery and favouritism by the officials in charge of the exercise.

AFRICAN EXAMINER gathered that the exercise is handled by the Enugu state Universal Basic Education Board (ENSUBEB).

It would be recalled Governor Ifeanyi Ugwuanyi – led administration recently began the recruitment of primary school teachers in the 17 local government Areas of the State, with a view to boosting elementary education in the State.

The exercise, which held simultaneously at council Areas of the State, including the famous Catholic owned College of Immaculate Conception CIC, Enugu, witnessed a turn-out of thousands of applicants.

Whereas those whose names were shortlisted wrote their examination at the designated council areas, the CIC played host to thousands of applicants who had their names missing in the list.

Trouble however started last weekend as the applicants at the CIC waited from 7 am till 4 pm before the process for the test commenced.

Said one of the applicants, “the failure started from step one. You can imagine a situation where the names of the shortlisted candidates were pasted just on the eve of the examination.‎

“So, all the applicants staying out of Enugu were automatically shut out of the system.

“Secondly, on the day of the examination, there was no sign of preparation for the exercise at all, we reported at the CIC by 7 am but at the end of the day, we managed to start the test by 5:30 p.m”.

He said “We had no seat, nowhere to place our paper; I just placed the answer script on my laps, even as there were thousands of us in a hall that shouldn’t take more than 200 persons.”

Also expressing his grievance on the exercise, another applicant alleged that some persons, who were acting as cronies of the board members of ENSUBEB, were allegedly demanding for a bribe, ranging from N130, 000 to N150, 000 in order to get the job.

“They are asking us to pay N150, 000 (one hundred and fifty thousand naira) for the teaching job. We now understand why from the onset the process was not made in such a way that the best would emerge.

“If they had organized the test very well, if the process had been credible, it would have been easy to pick the best out of the several applicants.

“But as it stands, they are just interested in the money they would make out of the system. You know how much they would get by collecting such money from thousands of applicants”

Another applicant said “one is not even so sure that he will get the job after coughing out such sum of money at this critical time.

“The Enugu State Governor, Hon. Ifeanyi Ugwuanyi should call the ENSUBEB to order. They should organize a credible test for us.

“We are ready to face credible process, not a make-belief exercise.”

But Chairman of ENSUBEB, Mr. Ikeje Asogwa, has denied the allegations, saying “There is nothing like that; nobody is collecting money.

” We have said it again and again that people should not fall victim, we have also been announcing it on radio for about two weeks now that nobody should give money to anybody.”