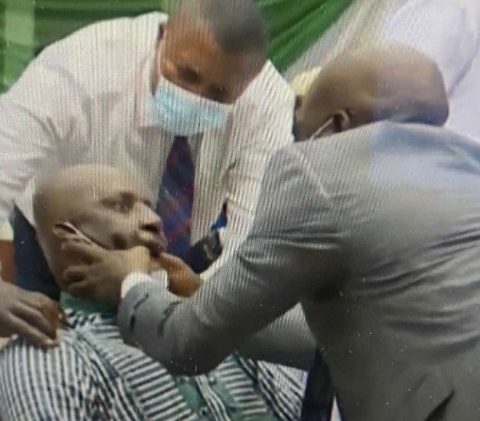 The shocking development happened as Prof Pondei – the Chairman of NDDC Interim Management Committee (IMC) is drilled by members of the House Committee on the NDDC.

The IMC Chairman and other members of the committee last week had walked out on the House committee members, due to controversy on whether the House committee Hon. Olubumi Tunji-ojo who allegedly has been indicted in the misconconduct saga has moral right or not to head the hearing.

After he collapsed, Prof Pondei who had been questioned for about 45 minutes was quickly attended to and rushed out of the Conference Room 231 – , venue of the investigative hearing.

As the situation unfolded, the Minister of Niger Delta Affairs, Godswill Akpabio, who was summoned by the committee following more allegations against him, stayed behind and watched.

It is not yet clear (as at the time of filing this report) whether members of the committee will resolve to proceed with the hearing or suspend it.

Recall that the immediate past Managing Director of the NDDC Joy Nunieh testified virtually last Friday from the State House of Rivers State Government.

Pondei Has Been Ill –NDDC

Meanwhile,  the Niger Delta Development Commission, NDDC, said Prof Kemebradikumo Pondei who collapsed at the national assembly has been ill and his doctor advised him not to attend the hearing.

A statement issued by the commission states: “the Commission wishes to disclose that Prof Pondei has been ill for the past two weeks.

“This morning, his condition deteriorated, and his doctors advised against attending the hearing.

“However, he ignored his doctors’ advice because of the realisation that his traducers will use his absence at the hearing to soil his name and reputation.

“He thought he could make it through the hearing and take care of his health later. “

Pondei Will Not Appear Before Panel Again – Speaker Gbajabiamila

The Speaker of the House of Representatives, Femi Gbajabiamila, has stated that the Acting Chairman of the Niger Delta Development Commission, Kemebradikumo Pondei, will not appear before the committee again after he slumped in an ongoing investigation hearing at the National Assembly.

Gbajabiamila stated this at the resumption of the session after the adjournment due to the collapse of Mr. Pondei stressing that the committee will adopt the written response of the MD.

He said: “There would be no need for the MD of NDDC to appear anymore since he has submitted a written response.

“I wish Mr. Pondei safe and speedy recovery and I have also sent the Medical Director of the National Assembly to follow up to ascertain the condition of the MD. Thank you very much and I, therefore, hand over to the current chairman of the Committee, Mr. Thomas Ereyitomi to continue with the hearing.”