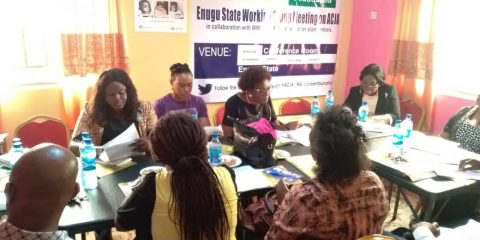 (AFRICAN EXAMINER) – A group working on the project, “Promoting Accountability and transparency in the administration of Criminal Justice System in  Enugu state, has renewed its call on police Authorities in the state to always allow Magistrates access to its cells.

It was observed that over the years, police in the state had not been allowing such senior legal officers access  to its cells, as well as granting of bails to suspects in some cases, even when the law empowers them to perform such function.

The working group, which is engaging key stakeholders in the implementation of administration of criminal justice Act ACJA, 2015 and administration of justice criminal law ACJL 2017 of Enugu state, made the submission Wednesday in Enugu during its 2nd bi- monthly meeting held at the conference hall of African Law Foundation (AFRILAW) in Enugu.

They noted that Even though, the issue had earlier been raised during its advocacy visit to the

state Commissioner of police, Mr. Suleiman Balarabe, who made a verbal promise to address it, there was still need for the police boss in the state to match his words with action via issuance of an official  memo to that effect to his men, particularly the Divisional police officers DPOs,

Commenting on the issue, the officer – incharge (OC) legal, Enugu state police Command, Mr. Pascal Nwachukwu, posited that allowing Magistrates access to police cell had never been an issue in the state, but emphasised the need for such senior legal officers  to always armed themselves with proper means of identification when embarking on such outing for security reasons.

In their separate remarks, the chief judge  (CJ) of Enugu state, Justice (Mrs) Priscilla Emehelu, and the chief Registrar, (CR) of the state High court,  Martha Onuoha, had expressed the commitment of the state judiciary to always do the needful in the implementation of the ACJA\ ACJL in the state.

The CJ, who chaired the meeting and was represented by Justice Angela Anidi, called on relevant bodies in the corridors of the  judicial system such as the International federation of women lawyers FIDA, Nigeria Bar Association NBA, Legal Aid council amongst others to always encourage  probono services, saying it remains one of the easiest ways of decongesting the nation’s prisons, Enugu state inclusive.

Earlier, founder of AFRILAW, Barrister Chinwike C. Chinwike, had on behalf of members informed the CJ and CR, that the group had recently paid advocacy visits to key stakeholders such as Comptroller of prisons Enugu state Command, state justice Reform team, Commissioner of police, among others on the implementation of administration of criminal justice Act ACJA, 2015 and administration of justice criminal law ACJL 2017 of Enugu state.

Our Correspondent who covered the meeting reports  that the working group is made up of the independent Corrupt practices and other Related offences Commission ICPC, the Economic and Financial Crimes Commission EFCC, Nigeria Bar Association NBA, National Youths Service Corp NYSC, FIDA,  the state Director of Public Prosecution DPP, amongst others.