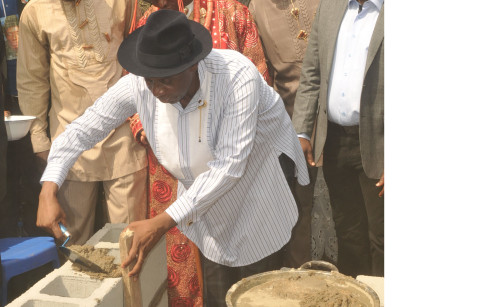 Rivers State Governor and Chairman of the Nigeria’s Governors Forum, Rt. Hon. Chibuike Rotimi Amaechi has called on the people of Akpor Kingdom to vote out the Peoples Democratic Party, PDP and Chief Nyesom Wike in the 2015 elections for allegedly desecrating the Akpor Kingdom, a strong hold of the Ikwerre ethnic nationality in the state. 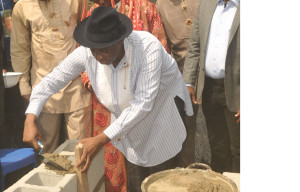 Amaechi stated this Weekend when he paid a courtesy call on the Nyenwe-Ali Akpor Kingdom, His Royal Majesty Eze (Ambassador) A. A. Orlu Oriebe and at the Launching/Foundation stone laying of the proposed Akpor Traditional Centre at Ozuoba in the Obio/Akpor Local Government Area of the state.

He said, the unholy collaboration between supporters of PDP and Chief Nyesom Wike, the PDP governorship flag-bearer to perpetuate the molestation of the Nyenwe-Ali stool in Akpor Kingdom currently under the kingship of Eze Orlu Oriebe with thugs and police, at the time when Mbu Joseph Mbu was Commissioner of Police was practically illegal and an act of disrespect to the traditional stools and elders of Ikwerre land.

According to him, “The All Progressives Congress, APC and my government will no longer hear and tolerate that you are molested by the Peoples Democratic Party, PDP. They only succeeded in molesting you during the time when Mbu Joseph Mbu was Commissioner of Police. But, now, it is time for the people of Akpor kingdom to allow the Riverine people of the State produce the next Governor in 2015 and I am sure you will honour this request”, Amaechi said.

He also promised to recognize traditional stools in the Obio/Akpor Local Government Area before the expiration of his tenure in May, 2015.

“On my table, there are so many requests for the recognition of traditional stools. I know that the Akpor kingdom occupies a high place in the Ikwerre ethnic nationality. Your people have a duty to protect the people occupying the traditional stools. Mgbueto stool will be recognized for the benefit of the people in that kingdom in Obio/Akpor”, Amaechi said.

Governor Amaechi further urged the people of Akpor kingdom to brace up and massively mobilize for the All Progressives Congress, APC in the 2015 elections as his administration is making frantic efforts to fix the Ogbogoro road soonest.

“You must start now to build APC and massively mobilize for the party ahead of the 2015 election: This is because I have done enough for the people of Akpor kingdom. My administration fixed the Ozuoba-Choba road. I even awarded 14 classroom blocks to Nyesom Wike at the cost of N112 million each. But, as You can see, he has not built even a building. He worships money, while I worship God. President Goodluck Jonathan does not like us, that is why we must vote out PDP and Jonathan back to Otuoke. I have developed Ikwerre people, even Nyesom Wike. I will not stop calling them thieves. My administration gave Nyesom Wike, the contract worth N2 billion to construct Eneka road and he disappeared with the funds”, Amaechi said.

He also mentioned that his administration has paid all outstanding salaries, assuring that payment of December salaries to workers will commence on 23rd and 24th to enable workers proceed for the Christmas celebrations.

Earlier, the Nyenwe-Ali Akpor kingdom, HRM Eze Orlu Oriebe, while acknowledging Governor Amaechi as the First Executive Governor to visit his palace, urged Governor Amaechi, to remain a guiding hand to Rivers people by sustaining the current dividends of democracy in the state.

“I appeal to you and wish to state categorically that, no amount of intimidation, suppression that will make me deviate from supporting Governor Amaechi. I have been facing a lot of opposition from the PDP. Thank God, Governor Amaechi has upgraded the Akpor stool to 1st class stool. Please, also consider other neighbouring communities.”

Eze Oriebe further maintained that with an Akpor traditional centre, the tradition, culture and artifacts of the kingdom will be preserved.

“I want to create history and as my Governor, I want you also to make history by launching and engaging in the Foundation Laying Ceremony of the proposed Akpor Traditional Centre. Time has come when we should have Akpor traditional centre where our artifacts and documents would be preserved. And after me, those to inherit the stool will begin from there”, Eze Nyewe-Ali Akpor said.

Also speaking, the CTC Chairman of Obio/Akpor Local Government Area, Dr Lawrence Chuku, said, he is optimistic that the proposed Akpor Traditional Centre will serve as an administrative Centre of the Akpor Kingdom where useful decisions are made by the people.