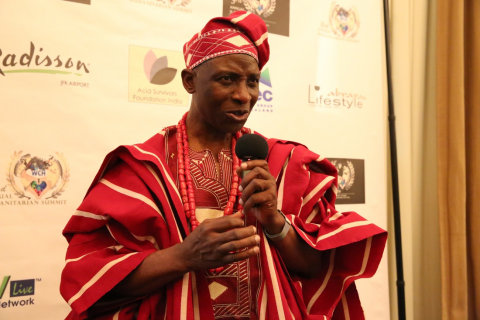 “On behalf of Morehouse College President David A. Thomas, it is my pleasure to announce that you have been nominated for induction into the Martin Luther King Jr. Board of Sponsors of our 152-year-old College.

“I hope that you will accept this honor and join us for the formal induction ceremony on Thursday, April 4, 2019 in the Martin Luther King Jr. International Chapel at 11 a.m.  This coveted honor can only be consummated with your presence at the ceremony.”

African Examiner gathered that the Board of Preachers, Collegium of Scholars, Board of Sponsors and College of Pastoral Leadership  comprise the Martin Luther King Jr. College of Ministers and Laity.

The Board of Sponsors, which Ambassador Tunde Adetunji was nominated for  is comprised of individuals who use their passion, influence and resources to support the work of peace, reconciliation, nonviolence, justice and moral social progress famously preached by Dr Martin Luther King Jr.

Sponsored by the Martin Luther King Jr. International Chapel at Morehouse College, the annual College of Ministers and Laity is the Chapel’s signature program. For 33 years, it has attracted some of the brightest minds across an array of disciplines to engage in cosmopolitan dialogue, learning, growing and revealing.

Dr. Hugh Morris Gloster Sr., the seventh president of Morehouse founded the Chapel in 1978. Dr. Gloster said that alumnus Martin Luther King Jr. ’48 was “the archetype of an educated person – one who combined academic achievement and professional success with personal integrity and social concern.” Gloster added that “the life of Martin Luther King Jr. [is] worthy of emulation by all.”

In recognition of Dr. King’s role as an exemplar of adaptive faithful servant scholar moral cosmopolitan leadership, a highlight of the College of Ministers and Laity is the induction of honorees into the Martin Luther King Jr. International Board of Preachers, Board of Sponsors, Collegium of Scholars and the College of Pastoral Leadership (added in 2016).

Like Dr. King, these individuals have demonstrated and are evolving toward great achievement in their chosen vocation, a profound commitment to their community and society, the planet and the cosmos and are living their lives according to a high standard of cosmopolitan ethical principles.

The honor to be conferred introducing each honoree to Forty-Two Normative Philosophical and Social Ethical Options, cosmopolitan ethical principles that guided Dr. King in leading the nonviolent civil and human rights movement and living his life.

Ambassador Tunde Adetunji is a visionary, an idealist, a realist, and a prince, born to a royal family in Nigeria. He is the Africa cultural Ambassador, CEO/founder of the Africa Heritage Foundation, Africa World Museum & Center, Africa Day in Atlanta and the Africa Radio and Television network.

He is an expert and consultant on Africa Affairs. He is a renowned presenter, an author, a master communicator, a motivational speaker and a researcher. He has been constantly nominated and featured on who is who in Black Atlanta, annual publication and was one of African Business Journal’s 100 Most Influential Multicultural Business Leaders for year 2010.

He travels to universities all over the United States and abroad promoting the theme “Africa Matters and Africa is the Future” and “Bridging the Gap and Building the Bridge between Africa and the Diaspora.” as well as “Turning brain drain into brain gain”

His versatility and expertise, as art historian, curator, anthropology, journalist and lecturer has made him a foremost dignitary on Africa and the African Diaspora.

Ambassador Adetunji’s decade long global  campaign of turning brain drain  to brain gain; Bridging the gap and  building the bridge to unite to unite the world as global village for peace, unity, Love and prosperity despite race, color and gender” align with  the principle, ideal and value of MLK, Gandhi and Nelson Mandela’s non violence  and racial discrimination.