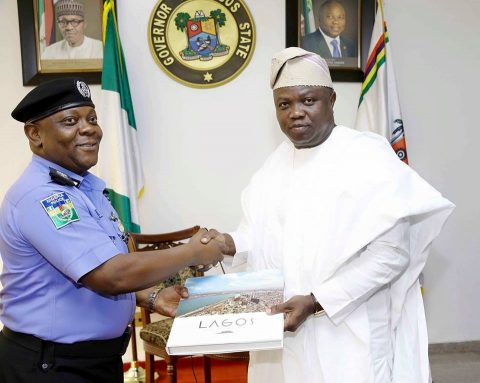 LAGOS, NIGERIA (AFRICAN EXAMINER) – Lagos State Governor, Mr Akinwunmi Ambode said he is confident in the ability of the new Commissioner of Police in the State, Mr Imohimi Edgal to deliver on the enormous task before him especially, on effective and efficient policing of the State.

Governor Ambode said this Tuesday, at Lagos House in Alausa, Ikeja when he received the immediate past State’s Police Commissioner, Mr Fatai Owoseni and the new CP alongside top officers of the Command.

Amobode stated there was no doubt about the enormous responsibility before the new police boss, still, it was gratifying that the new CP was very much familiar with the security architecture of the State.

The Governor recalled how security was made one of the focal objectives of his administration since inception, saying that the development was designed as part of efforts to build a solid foundation for the growth of Lagos economy and welfare of the people.

He thanked former CP Owoseni for contributing immensely to the security of the State during his tenure as the CP, and wished him success in his future endeavours.

While officially welcoming the new CP to the State, Governor Ambode acknowledged the fact that CP Edgal had been very familiar with the terrain having been in the State for long, and assured him of the support of the State Government to ensure his success in office.

He said: “We are comfortable that he (Edgal) does not have to start trying to learn the ropes because he is very familiar with the security architecture of the State and the enormity of the assignment that has been given to him. On our part, we will ensure that we support him as well as men and officers of the State Command.

“What is most important to us is that we must keep the city safe. Lagos must be safer, Lagos must be cleaner and it is based on that we can invite investors to come in. That is when we can project our 24/7 economy and so we cannot afford not to have a vibrant police force. More importantly is the fact that we in government have decided that without a safe city, we cannot have a prosperous State and the prosperity and the peace that Lagos is enjoying now is actually founded on that fabric of the safety of lives and property”.

The Governor also assured that his administration would support the present effort of the Nigeria Police to scale up community policing.

“We will give the new CP all the support and I want to also say that we will support community policing. You must have seen that in our action which was why we established the Neighborhood Safety Corps and we want to thank the Nigerian Police for supporting that.

“The establishment of the Corps is part of the fabric of the community policing that the Nigerian Police Force is now projecting and we will support it with materials, resources and also ensure that every community is properly policed and in that, we will have the peace that everybody need to go about their activities without let or hindrance.

“We are very emphatic on law and order and we will ensure that our judicial system works in convergence with the Nigerian Police so that we can keep the city safe and more prosperous,” Governor Ambode said.

Governor Ambode also commended President Muhammadu Buhari and the Inspector General of Police IGP, Mr. Ibrahim Idris for the positive trend and improvement in security that the country had witnessed in recent time.

Earlier, the immediate past CP Owoseni thanked Governor Ambode for the support the Police Command enjoyed during his tenure, especially the massive procurement of equipment and logistics for officers, saying that the gesture contributed largely to the achievements recorded in the last two years.

On his part, Edgal assured that he would hit the ground running and employ various means including community policing to ensure that Lagos emerges as the safest city to live and do business in Africa.

He said Lagos, being a cosmopolitan city, must be policed based on dynamics required, and that he would bring his passion to bear to ensure that residents of the State could sleep with their two eyes closed.

He specially appreciated Governor Ambode for the support the police had enjoyed in recent times and pleaded for the continuation of the kind gesture, just as he assured that security of lives and property of Lagosians would now be a top priority.

“I want to assure Governor Ambode that under my watch, you will have no cause for complaints or concerns. We will serve the people of Lagos with all our hearts and might. Let me use this opportunity also to warn criminals and hoodlums that it will not be business as usual.

“I also want to warn officers and men of the command that issues of human rights abuses, corruption, indiscipline generally will no longer be a slap on the wrists. The full weight of police regulations and the law will be meted out to anybody found wanting under my watch,” Edgal said.