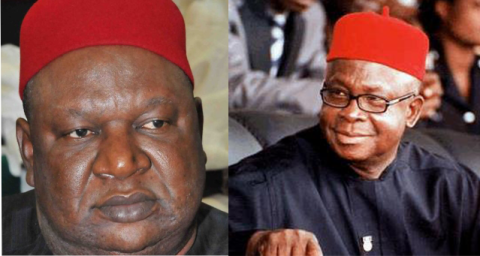 FROM IGNATIUS OKPARA, Abakaliki – Long ago, the game of Politics had always been synonymous with disagreements and quests for personal interests among politicians, be it in developed or developing countries. 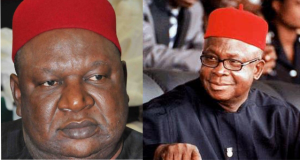 Besides, it equally involves use of intrigues, manipulation, maneuvering, as well as all manner of propaganda, including orthodox and unorthodox strategies, aimed at defeating opponents.

Politicians, especially those of the Nigerian stock, are always desperate while pursing their political aspiration hence, they often engage in all manners of unholy acts including shedding of blood, all in the name silencing their opponents.

Regrettably, no matter most Nigerian politicians’ background or educational status, once they delve into the political environment, they start behaving alike, as most of them lack integrity.

The core Nigerian politicians always throw decorum and fear of God to the mud while pursing their ambition.

Suffice it to also say that in Nigeria, virtually all politicians are election riggers and manipulators, especially when they belong to the ruling party.

It is equally a hidden fact that Nigerian Political class only raises alarm or run to the media whenever they are out- rigged by their opponents, or their interest was not well protected in their political family, (party).

Ordinarily, disagreement ought to be part of the game hence, the saying, in politics,” we disagree, to agree”, but owing to the desperate tendencies of the gladiators, in Nigeria, the reverse had always be the case.

For instance, the political arena in Ebonyi state, which pride its self as “Salt of the Nation”, which many believes is the most neglected and backward in terms of development in the south-east, Nigeria, had remained tensed because of divided interest.

The key PDP political actors in the area have been at war over who controls the soul of the party in the state ahead of the general elections.

Prior to the PDP primary elections in the state, serious political war ensued between governor Martin Nwancho Elechi, his Deputy, Engineer Dave Umahi, who is now the party’s candidate for the forthcoming gubernatorial election, and (SGF), senator Anyim Pius Anyim, over who take charge of the party’s structure in the area.

The supremacy war, which is still raging, has indeed done and still doing serious harm to the party in the state.

To rubbish governor Elechi, who was president Goodluck Jonatha’s 2011 Southeast campaign coordinator, the Abuja politicians, led by Anyim, ensured that the governor’s alleged anointed candidate and immediate past minister of Health, professor Onyebuchi Chukwu, did not pick the PDP governorship ticket.

Apart from denying the governor’s preferred candidate the party’s flag, the Abuja group, also made sure that Elechi’s 2015 senatorial ambition was thwarted, as well as that of his allies who were nursing one political dream or the other.

As at today in Ebonyi politics, the governors’s political carrier is at the verge of total collapse, after loosing the entire party structure to secretary to the government of the federation, even though, he has vowed to remain in the party to fight the injustice meted to him as leader of the party in the state.

Going by what is on ground presently in the Ebonyi state chapter of the PDP, one would say without fear of contradiction, that governor Elechi’s political relevance will come to logical end on May, 29th, 2015, after handing over to his successor.

However, to worsen his political woes, the governor, had recently allegedly directed his supporters to decamp from the PDP to the opposition Labour party (LP), to pursue their political dreams, while he (Elechi), their leader, remains in the PDP.

The crisis rocking the party in the state, had continued to attract comments and reactions, from stakeholders within and outside the state.

While many political watchers believes strongly that if not resolved amicably, it may affect PDP in the forthcoming general elections, those loyal to SGF and Deputy governor’s camp, are confident that they will come out victorious at all levels of contest without the governor and his supporters.

One of such groups that have expressed concern of the present political feud in the state PDP is a body, under the platform of Ebonyi Solidarity for Good Governance (ESGG).

The group had recently warned the national leadership of the Peoples Democratic Party (PDP) to as a matter of urgency resolve the ongoing crisis rocking the party in the state, or risk losing the governorship and other elective offices during the general polls.

In a statement signed by the Coordinator of the group, Mr. Bonaven­ture Ugwuede, the ESGG expressed regret that nothing had been done by the PDP National Working Committee (NWC), led by Alhaji Adamu Mu’azu to placate aggrieved aspirants, who felt cheated over the manner the party’s primaries were conducted in the state.

They stated that mere admonition by the president and party national chairman that aggrieved aspirants should not dump the ruling party was not enough, noting that some of the candidates being paraded for the forthcoming elec­tions were not popular in the state.

It reads in parts: “We particularly note the situation in the state where there seem to be total loss of confidence in the leadership of the ruling party and the controversial primaries, which led to the exodus of party members to Labour Party and other political parties.

“We wonder why PDP is doing hide and seek after announcing that there would be no primaries in the state and some other states and some factions of PDP latter went ahead and conducted pri­maries and PDP national leadership later accepted the result.

“A situation that is hunting PDP in the state today with the defection of thousands of aggrieved members to other parties may cause PDP to lose Ebonyi State, which it laboured to sustained since 1999 due to some selfish interests in Abuja.”

The group therefore, advised the National leadership of the PDP to do something about the situation, or forget about the state in the forthcoming elections.