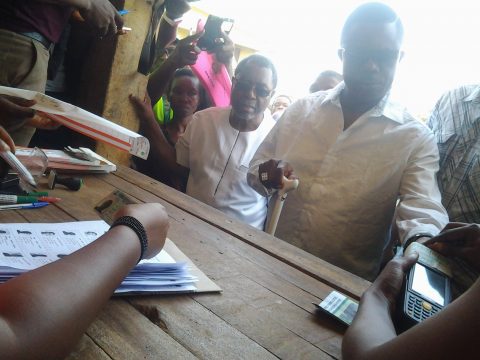 (AFRICAN EXAMINER) – Governor Willy Obiano of Anambra state has voted in today’s (Saturday) gubernatorial election in Anambra state, expressing confident that he will win the election by a landslide.

He voted at about 9:49 am at his Eri primary school Otuocha ward 1 in Aguleri , Anambra East  council area of the state after being accredited by the electoral officers.

Speaking with newsmen, shortly after voting, Obiano who is seeking re-election under his party, the All progressive Grand Alliance ,APGA expressed satisfaction with the conduct of the polls so far.

He said “I am  very confident that at the end of the day I will carry the day. I will win the election, in a landslide

“There is nothing to worry about at this point”, calling on his supporters to come out enmass to vote for him.

Our Correspondent covering the election reports that the exercise is witnessing large turnout of voters, especially in Anambra East senatorial district, where the governor and candidate of APC, Dr, Tony Nwoye hails from.

Voting has commenced in earnest in parts of the state.