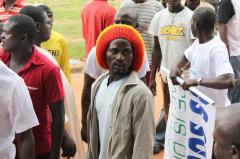 The lingering leadership tussle in Okpoko community in Ogbaru local government area of Anambra State Tuesday took a dramatic twist as leader of one of the rival group, Chief Innocent Ogbuefi, allegedly used thugs to invade the “elephant house” Okpoko Community office and dethroned the  President-General of the area, Chief Emesinwe.

some of the warring faction of Okpoko community crisis

A source in the area who pleaded anonymity with our correspondent said the embattled Emesinwa was democratically elected by the people of the community, saying he received a court order restoring his leadership, but the order according to him, was ignored by his antagonists who forcefully broke into his office and assumed leadership Tuesday.

The source further told African Examiner that the president – General, lost the backing of the state government based on non- indigeneship.

It would be recalled that community leadership tussle in Okpoko had persisted right from the time of former president General, Hon. Benson Nwawulu as the President-General of the area.

Hon. Nwawulu is currently the member representing Ogbaru 1 Constituency in the Anambra State House of Assembly.

Addressing newsmen in Okpoko, the Divisional Police Officer in charge of Okpoko Police Station, CSP Chukuwemeka Ugwu, regretted that despite all efforts made to reconcile the warring factions on the tussle, the problem still persisted.

He prayed that one day all the parties would come together and reconcile for the interest of the people living in the area.

Chukwuemeka noted that despite the internal wrangling among the leaders the community has since then recorded low commission of crime since he arrived the community as the divisional Police Officer.

The DPO maintained that the low crime rate recorded in the area was through the support of the state government and police hierarchy, adding that the feat wouldn’t have been possible without the co-operation of men and officers of the division.

The DPO however, expressed the readiness of the police to sustain the tempo within and after the Christmas and New Year celebrations.

Meanwhile, the community is currently divided, as the indigens have pitched tents with different groups.