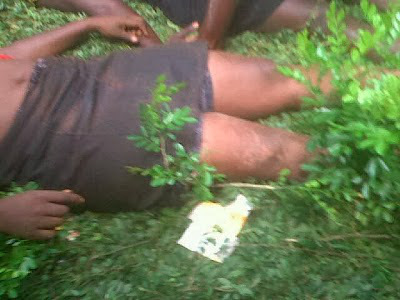 The All Progressives Congress (APC) has said Gov. Peter Obi of Anambra State should be held responsible for the stampede at a vigil in Uke that left over 30 people dead, for turning a house of prayer into a house of politics. 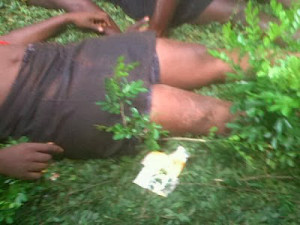 One of the victims of the Anambra Church Stampede

In a statement issued in Lagos on Sunday by its Interim National Publicity Secretary, Alhaji Lai Mohammed, the party said had Gov. Obi and the unpopular candidate he is seeking to impose on the people of the state, Willie Obiano, not gone to the praying ground to engage in wrongful politicking, the innocent souls who died at the vigil would be alive today.

It said while there was nothing wrong in a state governor going to a vigil, such visit should not be impromptu in order for the organizers to make the necessary security arrangements, and that it should also not be a license to engage in political campaign.

APC condemned the plan by Gov. Obi to set up a panel to investigate the stampede, considering that the governor himself is at the centre of the whole tragedy.

”It is therefore disingenuous for the governor’s spin doctors to be shifting the blame on the supporters of our candidate, Senator Chris Ngige. The simple truth is that there would have been no stampede if Gov. Obi had not come to the vigil or, even if he had come, had not attempted to politicize the gathering that was meant strictly for prayers,” APC said.

The party said Gov. Obi should now take a cue from the disapproval that is trailing his desperate bid to impose a candidate on the state by ending all activities that could put the lives of Anambrarians at risk.

”We recall that an angry protest also greeted the attempt by the APGA campaign train, with Obiano in tow, to shut markets in Onitsha last month. The protests effectively short-circuited the APGA campaign. Had the governor and his entourage learnt their lessons from the Onitsha debacle, they would not have needlessly endangered the lives of the same people whose votes they are desperately but undeservedly seeking,” it said.

APC said the candidacy of Obiano is not worth the blood and tears of the good people of Anambra, hence Gov. Obi should stop trying to impose an unpopular candidate on the people.

The party prayed that God would grant repose to the souls of the departed, while wishing all those injured a speedy recovery and the families of the victims the fortitude to bear their losses.