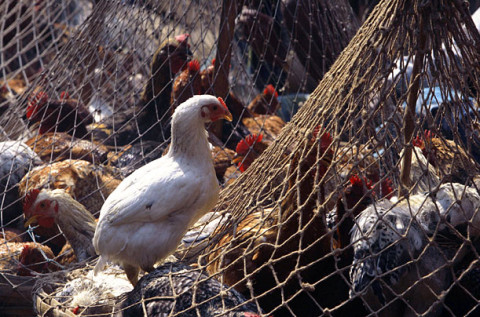 Ayo Balogun, Lagos – There is anxiety in Lagos as the dreaded Avian Influenza (AI), known as Bird Flu hit Lagos State, Nigeria, with 2,000 fowls at a Poultry Farm in the state destroyed to checkmate the spread of the virus to human.

At a news conference on Friday in Lagos, the Lagos Commissioner for Agriculture and Cooperatives, Prince Gbolahan Lawal said there has been an outbreak of Bird Flu at a poultry farm at Badore area of Epe.

He said 2,000 birds had been killed to prevent the spread of the virus to other areas and to people, saying that the poultry farm in question had been quarantined, while he refused to give the name of the farm for security reason.

“During the last Christmas and New Year Festival Period, the Veterinary Department of the Lagos State Ministry of Agriculture and Cooperatives received a report of high mortalities of birds in poultry markets across the state.

“Bird samples collected by the department and sent to the National Veterinary Research Institute in Vom, Plateau State, have unfortunately been found positive for the H5 strain of the Avian Influenza, popularly known as bird flu.

“Samples collected from a poultry farm in Badore have also been confirmed positive and a Zoological park based in Victoria Garden City presently experiencing high mortality of wild birds in captivity is on the suspicion list and it is being investigated,” he said.

Lawal stated that in order to contain the spread of the infection, the Lagos State Ministry of Agriculture and Cooperatives has embarked on Active Diseases Search by surveillance agents, bio-security Monitoring and Sensitization in poultry farms and markets, disinfection of Poultry Markets and decontamination of affected farms and sensitization of poultry farmers and traders on insurance policy issues.

The commissioner said a team of eight technical staff, comprising of representatives of the Federal Livestock Department, National Quarantine Service and the National Veterinary Research Institute is currently in the state on disease assessment and surveillance.

Emergency Active disease search carried out in the last 48 hours has so far indicated no spread of the disease.

“In order to contain the spread, the active disease search is on going in farms and poultry markets. Sensitization of poultry farmers and fowl sellers is being vigorously embarked on by the Surveillance and Extension Agents deployed by the ministry to cover the entire state. Disinfection of all live bird markets in the state is already on going.

“All poultry farmers and fowl sellers are hereby enjoined to adhere strictly to bio-security measures and report unusual incidence of high mortalities of birds. The Ministry of Agriculture and Cooperatives and the Ministry of Health have deployed surveillance agents to the various parts of the state,” he stated.

Avian influenza (AI), commonly called bird flu, is an infectious viral disease of birds. Most avian influenza viruses do not infect humans; however some, such as A(H5N1) and A(H7N9), have caused serious infections in people.

According to the World Health Organisation, WHO, outbreaks of AI in poultry may raise global public health concerns due to their effect on poultry populations, their potential to cause serious disease in people, and their pandemic potential. Reports of highly pathogenic AI epidemics in poultry, such as A(H5N1), can seriously impact local and global economies and international trade.

The body said majority of human cases of A(H5N1) and A(H7N9) infection have been associated with direct or indirect contact with infected live or dead poultry as there is no evidence that the disease can be spread to people through properly cooked food.