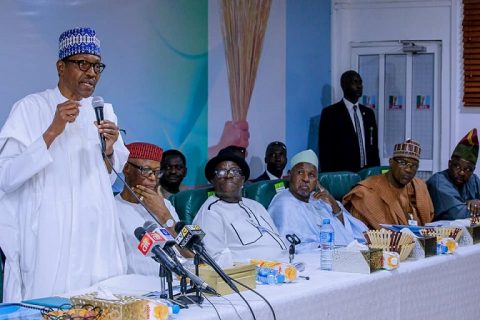 Photo: President Buhari speaks at the National Executive Committee (NEC) meeting of the All Progressives Congress (APC) in Abuja, March 27, 2018.

Consequently, Mr. Buhari Tuesday in Abuja while giving his address at the NEC meeting which still underway ordered the reversal of the decision which received the support of the National Working Committee NWC and the party’s Governors.

Tenure extension, President Buhari stated was at variance with the party’s constitution as well as the Constitution of the Federal Republic of Nigeria.

He warned the APC Leaders to be careful on their stand on constitutional matters, so as to avoid giving undue advantage to the opposition.

The President added that he had sought the Legal advice on the matter from the Attorney General and Minister of Justice.

It would be recalled that a former Lagos State Governor and a National Leader, Asiwaju Bola Ahmed Tinubu APC kicked against the tenure extension, leading to controversy between him and Chief Oyegun.

The tenure extension granted Chief Oyegun was automatically extended to the State, Local Council and Ward levels of the party.

Ahead of Tuesday’s meeting, the President has directed Chief Oyegun to meet with Tinubu and broker peace with him. Oyegun is believed to be enjoying the support of the APC Governors.

The former Lagos State Governor who is conspicuously absent at the APC NEC meeting was recently charged with the responsibility to reconcile all the feuding parties with the APC across the country.

Meanwhile, In his reaction, Former Lagos state governor, Asiwaju Bola Tinubu has hailed the action of the president declaring it as victory for democracy and legality.

Part of his reactions reads thus:

“President Buhari’s action saves the party from serious legal turmoil. If the elongations were deemed illegal then all subsequent party actions, including the nomination of all of our candidates for elective offices, might also be of questionable legality. Such a predicament would constitute an unnecessary and mortal blow to the party and its role in promoting progressive governance to Nigeria.

“Moreover, President Buhari has affirmed for all to see that our party is one based on the rule of law coupled with a firm adherence to internal democracy. While it would have been easy to allow the ill-conceived motion of 27 February to stand, President Buhari showed principle and courage by steering the party back to its original and correct path.

“The President has spoken. Today is a good day for those who cherish democracy and legality.  His action will also serve to strengthen the party by allowing party members, including present incumbents, to seek to contribute to the party by vying for executive offices as they see fit.

“His action will go far in advancing the process of internal reconciliation that is now underway. It is a time for the party to move forward and begin to plan and organize the needed congresses according to the existing timetables. After all, a party bearing the name All Progressives Congress should be the last party to resist holding congresses in which all its people have a fair say and fair chance to aspire to any position in the party for which they are qualified to hold

“Again, this is a good day for the APC and democratic political practice in Nigeria. We shun the politics of old to move toward a new and better way of governing ourselves and this nation.”