The All Progressives Congress (APC) has strongly condemned the harassment of its Deputy National Secretary, Malam Nasir El-Rufai, by the Department of State Security (DSS), describing it as a shameful overkill. 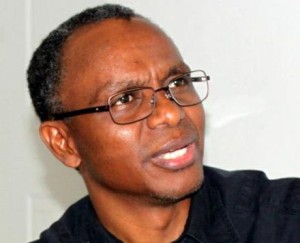 The DSS on Friday stormed the residence of El-Rufai in Abuja without producing any arrest warrant.

In a statement issued in Abuja on Friday by its Interim National Publicity Secretary, Alhaji Lai Mohammed, the party expressed shock that the DSS was seeking to arrest El-Rufai for merely exercising his constitutional right of free speech.

It said there was nothing inciting or extraordinary in the statement credited to Malam El-Rufai that there might be violence if the 2015 general elections were not free and fair.

”What our Deputy National Secretary said is a statement of fact and should not warrant any harassment, unless of course the DSS is saying that the 2015 general elections will not be free and fair,” APC said.

”The statement is a matter of cause and effect and amounts to a patriotic call for the 2015 general elections to be free, fair and credible. If this statement now rankles the DSS, then the department has a lot of explanation to do to convince Nigerians that it was not engaging in a witch-hunt, considering the case instituted by Malam El-Rufai against it (DSS) over his illegal detention in a hotel in Akwa during the Anambra governorship poll last November,” the party said

It wondered why the DSS has suddenly found its agility, after playing dead when people like Chief Edwin Clark, Asari Dokubo and Chukwuemeka Ezeife issued a direct threat to Nigeria’s continued existence over President Goodluck Jonathan’s second term ambition.

”The DSS is free to join the police in becoming a partisan and compromised national institution, but it should weigh the consequences of such action on its long-term credibility,” APC said