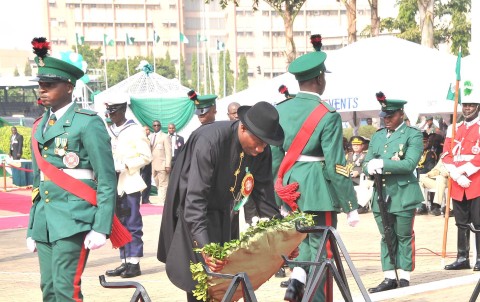 As the nation marks the 2014 Armed Forces Remembrance Day, over 3 million ex-service officers are being owed four years pension arrears in Lagos. 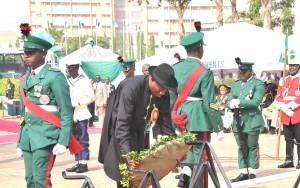 The Armed Forces Remembrance Day was marked with this sorrowful news in Lagos, Nigeria as government officials took turns to lay the wreath, an hypocritical act as those they sought to honour have their families languishing in penury.

Spokesperson of the Nigerian Legion of ex-service men, Lagos State chapter, Col. Ebenezer Sholotan disclosed that there are over three million ex-service men in Lagos, waiting to collect their four years pension arrears.

Sholotan lamented that, “the Federal Government hasn’t been fair to ex-service men in the country. The worst treatment anyone could get from the government of his father land is what the Legion is receiving from the central government.”

“For four years, the Federal Government hasn’t paid our pension arrears. Our widows are dying and the federal government showed no concern to our plight. This has compounded the suffering of some of the widows of ex-service men. They now sell Akara (bean cake) by the road side today.”

Sholotan complained that the “government isn’t showing any concern to our welfare. Every year, they assure us that the fund has been included into the budget but at the end of the year, the fund isn’t paid to the pensioners.”

“The arrears, depends on the year of retirement. At least each of the ex-service men is expected to collect N20, 000. That is the reason why we are disturbed. The money cannot be compared to the allowance they allocate to themselves. That is why we are embarrassed. We risked our lives for the development of this nation. But the federal government isn’t concerned about our welfare,” he decried.

Governor Babatunde Fashola of Lagos State lamented the non-payment of pension arrears of ex-service men and lack of better welfare package for widows of fallen soldiers and their relatives by the Federal Government.

The governor, who was represented by his Deputy, Mrs. Adejoke Orelope-Adefulire said that issues of security, as stated in the 1999 constitution is the sole responsibility of the Federal Government, adding “this is on the exclusive list.”

“And because we know the importance of welfare to this people, the Lagos state government has been hosting the legions and responding to their care. We have a better welfare package for any officer posted to Lagos and we will continue to ensure that they get robust care in Lagos state,” he promised,” he stated.