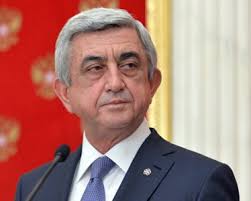 (AFRICAN EXAMINER) – Following the protest instigated by opposition, the Armenian Prime Minister Serzh Sargsyan has resigned from the office.

Mr. Sargsyan’s resignation occurred after 11 days of protests against his overdue stay in power.

The opposition supporters accuse him of serving beyond the maximum and mandatory 10 years as President.

The PM while making up his mind said: “The street movement is against my tenure. I am fulfilling your demand”.