At Lafia Rally, Labaran Maku Under Attack For Dumping PDP For APGA 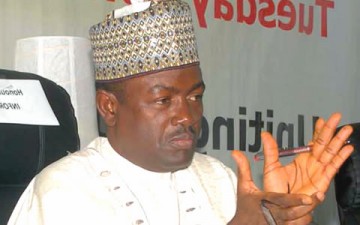 From Ganiyu Nasirudeen, Lafia – Former Minister of Information, Labaran Maku came under serious attack Tuesday, by the ruling PDP Chieftains in Lafia, the Nasarawa State capital as the party campaign train visits to canvass for votes in next month’s election.

The former National Chairman of the party and Director General of its Presidential Campaign Organization, Senator Ahmadu Alli launched the attack when in his remarks described the former Federal Government spokesperson as an ingrate.

In the same vein, the Senate President, David Mark in his speech at the Lafia Township Stadium venue of the Jonathan-Sambo rally hit at Maku and also described him as a liar.

The final and the heaviest swipe was by the incumbent President Goodluck Jonathan, who refused to be diplomatic in the denial that Maku never spoke with him when he wanted to defect to another opposition, the All Progressives Grand Alliance (APGA).

President Jonathan stressed that contrary to the speculation that Maku sought his endorsement before he crossed to APGA to actualize his governorship ambition, he retorted if he did, that would amount to anti-party activity.

Mr. President declared that he could not have opted for such an option and approved the approach, especially as the party leader.

It would be recalled the former Information Minister was humiliated just like some of his cabinet mates, including Professor Chibuike Onyebuchi; (Health) Emeka Nwogu; (Labour) Musiliu Obanikoro (Defence) and two others in their States PDP governorship primaries.

Nyesom Wike of Rivers State was the only survivor of the disgrace meted out to some of the President Jonathan’s ministers who resigned to clinch their state’s gubernatorial tickets.

In the meantime, President Jonathan in his pro-youths campaign at the Lafia rally, declared if re-elected, he will not hand over to any candidate who is above the age of 60.