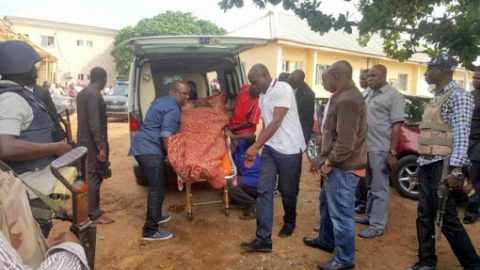 KOGI, NIGERIA (AFRICAN EXAMINER) – The embattled Kogi State Senator Dino Melaye Thursday arrived in Lokoja, the Kogi State capital and was arraigned before a Magistrates’ court in the city.

Melaye, who has since last week, been hospitalized in Abuja due to scuffle he had with the Police was brought to the court 2 on a stretcher.

The Lawmaker who escaped being recalled last weekend by his Kogi Western Senatorial zone was brought in a Toyota Hiace police ambulance.

Melaye has in the past vowed that he would not make himself available to the Kogi State Police Command for security reason.

He and six other suspects were accused of gun-running.

The Kogi Police Command planned to parade the suspects including Melaye before journalists over the alleged criminal offence.