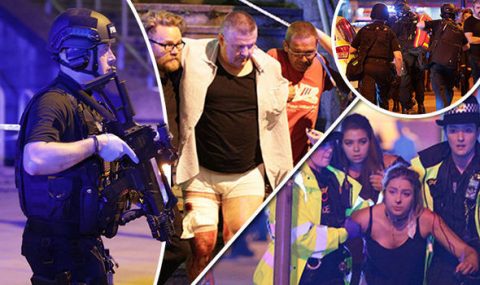 (AFRICAN EXAMINER) – At least 19 people were killed and about 50 others were injured in a suspected suicide bombing Monday night after an Ariana Grande concert at Manchester Arena in England, authorities said.

Greater Manchester Police said the incident was being treated as terrorism.

Police said the explosion took place outside the arena, which is near the Manchester Victoria transit station, as the concert ended at about 10:35 p.m. local time, catching people as they exited.

A representative of Ariana Grande said the singer, who has millions of young fans around the world, was not hurt. Likewise, Bianca Landrieu, the Boston hiphop star known as Bia, who also performed, tweeted: “Guys we are okay!!!”

All lines to Manchester Victoria station were closed, National Rail said in a statement. Northern Railway said the station had been evacuated.

Ivo Delgado, who attended the event, told NBC News that the concert had just ended when “I just heard a loud bang.”

“People started screaming and going to the other side of the arena,” said Delgado, who said he saw at least one person with blood on his face.

Steve Rotheram, mayor of the Liverpool City Region, tweeted that his two daughters had been in attendance and were safe.

Manchester Arena, which opened in 1995, is one of the largest indoor arenas in Europe. More than 1 million people fill its 21,000 seats every year./NBC