Atiku Is Set to Dump PDP for APC

Less than 24 hours in which 37 members of the House of Representatives dumped their party , the People’s Democratic Party (PDP), former vice president Atiku Abubakar has hinted that he is also considering decamping to the All Progressive Alliance (APC). 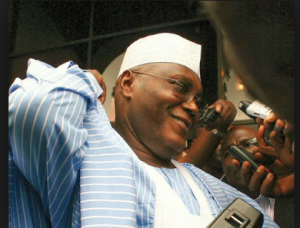 The former vice president gave the hint while speaking to Journalists shortly after his meeting with leaders of the APC in his Abuja home.

He told reporters that the meeting was very fruitful and that he would consult with his political associates nationwide before joining the APC.

“We want to let you know that we had very fruitful discussions and you know I have always believed in a two-party structure. We have discussed extensively and I will meet with my political associates and friends. I will call my stakeholders across the country. We will take a decision and address the press and let you know our decision.” Atiku stated

Recall that five PDP governors recently decamped to APC, followed by yesterday’s defection of 37 members of the House of Representatives as APC now have majority members in the lower chamber.