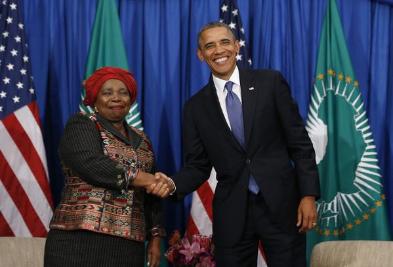 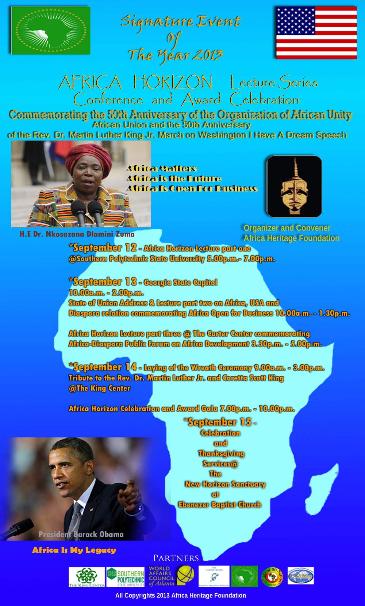 The newly appointed chairperson of the African Union (AU) , Dr. Nkosazana Dlamini Zuma will be addressing a global
audience from virtually all the nations of the world during her scheduled state visit to Atlanta in September this year.

The epoch-making visit slated for September 12 to15, 2013, will not only mark the fifth visit of the powerful delegation of AU’
s top executives and  chairperson, but will also coincide with the Union’s 50th Anniversary as well as the 50th Anniversary
of the historic March on Washington, a moment immortalized by Rev. Dr. Martin Luther King Jr.’s  ‘I Have a Dream’ speech.

In addition, it will also coincide with Africa Day celebration and  the inauguration  of  the  city  of   Atlanta  and  the  state  of
Georgia  as  the  epicenter  and the destination of the 55 nations of  Africa  business  potentials  and opportunities  to
USA pioneered and founded by the Africa Heritage Foundation.

A media statement announcing the visit also disclosed that Dr. Zuma will use the opportunity to address National leaders,
Chief Executive Officers (CEOs) of Fortunes 500s, the Africa Business Round Table, the UN as well as major associated
press, adding that all those who have a vested stake in the future of the world’s economy and direction, are invited to hear
the message of the AU which is; “Africa is the future. Africa matters.”

“Committed to mutualistic business opportunities, this four day event will provide crucial information about Africa’s
development and future, while simultaneously seeking to establish partnerships for the development of Africa and the
bridging of international gaps between Africa, the Americas and the Diaspora”, the statement said.

The statement also noted that the new AU Chairperson is the first woman to chair the Union and that seems to portray her as
a single voice for the AU but her visit in September follows the legislation of the SR9 Resolution which specifically designates
Georgia as the international gateway for the exchange of knowledge and commerce between the United States of
America, Africa and the Diaspora.

“This powerful new legislation, opens a promising pathway of commerce for not only Georgia, but the United States as a
whole, and is in lieu with Governor Nathan Deal’s commendation of Africa Day, in which he cites the primary
objectives of Africa Day being [the development] of international trade, supporting emergence of Africa’s private
sector and promoting the beneficial relationship between African nations and the United States”, the statement added.

The SR9 resolution is the culmination of the African Horizon Movement which began in 1996 with the Olympics in Atlanta,
and signifies the Africa Heritage Foundation’s dynamic work toward the celebration and unification of people of African
descent indigenous, intimate and distant across the Diaspora.

Lending credence to Africa’s prospect, the CEO of Africa Heritage Foundation, Ambassador Tunde Adetunyi proudly
declared that: “Africa is open for business. This is larger than Georgia. This is larger than the United States. This is larger
than Africa. This is about bringing the world together for sustainable development and divine economic undertaking.
This is a new legacy of mankind.”

Ambassador Adetunji further observed that Africa is not only a continent of possibilities but one that  has re-emerged as the
new frontier and the antidote to the global economy, adding that vision is greater than ambition.

In the same vein, the Press Director of the White House expresses the desire to make the AU ‘the face of Africa’.
President Obama, recently awarded an Honorary Doctorate in Law from the University Johannesburg, was asked, “What will
be your legacy?” His answer was, “Africa will be my legacy.” Citing Nelson Mandela as his hero, this recent honour
symbolizes not only the President’s stake in Africa, but interwoven future of the United States and Africa. “The destiny
of Africa and America is tied together,” once stated Dr.  Zuma.

“The recent investment of China into the AU with the construction of the Union’s Conference Center has set the
tone for foreign interest in emerging African development. With maturing and continued ventures from the States, the
facilitation of a lasting relationship with Africa will generate job opportunities and incalculable growth. The strategic use of
resources, wisdom in communication and coordination, and the invaluable capital of trust and dignity will set the pace for the
growth between Africa and the States for years to come, if not, the pace of growth in the world”, the statement further
explained.