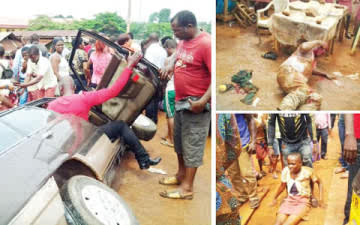 At least, seven secondary school students and passerby were feared dead on Thursday following a ghastly motor accident at the Umuokpu Junction along the old Onitsha-Enugu Expressway, in Awka, the  Anambra State capital. 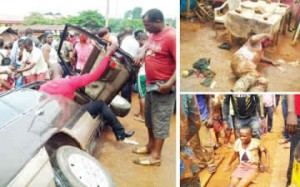 scene of the accident

One of the victims   was reported to have been crushed in the head.

Apart from the seven students, 10 others, including road-side traders, reportedly sustained various degrees of injuries, especially in the head, limb and body.

The ugly incident, threw the entire area into confusion, as sympathisers especially women, were seen crying uncontrollably, just as some people scampered to rescue the victims.

An eye witness told our correspondent that the students had just closed from school and were waiting in their numbers to board a bus home when the car ran into them.

Other victims included an aged man, who had his right leg broken, his right eyes cut open and a whitish substance oozing out of his forehead.

However, another victim was trapped under a commercial bus that tried to avoid colliding with the ill-fated Toyota Camry.

The unfortunate disaster paralysed commercial activities in the area as the car also crushed the stands of fruits, food, and recharge cards sellers.

The road was littered with items, such as fruits as well as destroyed tables and umbrellas on which they were previously placed.

The driver of the car, who was also injured in the accident, was able to climb out of the mangled car.

Hyginus Omeje, the Anambra State Sector Commander of the Federal Road Safety Corps, who confirmed the incident, said he was waiting for his men to give him full details of the accident.

The injured victims, were later taken away to an undisclosed hospitals.