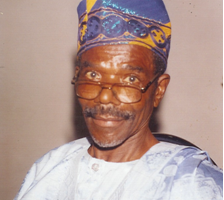 The O’odua Liberation Movement and the O’odua Nationalist Congress, ONAC have bemoaned the sudden death of Baba Omojola fondly referred to as the father of Yoruba self determination struggle.

In a statement  issued on Saturday, the groups said Baba’s last assignment was in Akure where he took part in the Yoruba self determination groups’ demand for autonomy and the right of secession to be included in the Nigerian constitution.

Baba was with four members of the OLM and ONAC on Thursday evening. In the same car they left for Akure from Lagos with protest placards and banners calling for Yoruba autonomy and O’odua Reupublic as demanded by some of the self-determination groups.

At 75 years old, he joined hundreds of O’odua self-determination groups from across the South West states for the protest.

The groups recalled that Baba was an unassuming revolutionary who lived the last 50 years of his life defending humanity. He was a covert aide of the late Chief Obafemi Awolowo and Kwame Nkrumah. He worked in Kano with the late Aminu Kano in the then Workers Socialist Party.

Baba attended the London School of Economics and also studied in Warsaw, Poland. He was a consultant to the United Nations, (UN) and was a leading figure in the campaign against military rule which earned him years in detention at Kuje prison.

Baba dedicated the last 20 years of his life to the campaign for an independent Yoruba Republic. He was pursuing this goal in a non-violent manner. He lived a frugal live and did not own a car.

He was even yet to complete his private home located at Aja in Lagos. Though Baba had bought a large piece of land in Ajah in the 1960s, he gave out the plots of land free to many of his comrade friends including the late Alao Aka Bashorun, Dr Frederick Fasehun and several others with the hope of building what he called a “Revolution Estate.”

The groups said Baba gave all he had to Yorubaland without asking for anything in return and died right on the field of his struggle for his own nationality.

Baba was the engine room of the Pro-National Conference Organisations, PRONACO where he worked selflessly with the late Pa Anthony Enahoro.

He was one of the closest aides of the late Pa Micheal Imoudu and wrote the late labour leader’s biography.