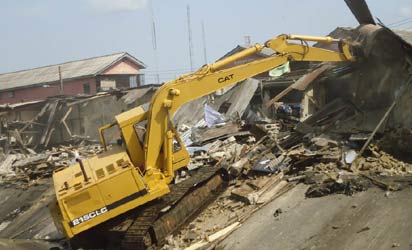 Residents of Mowo Phase II in Badagry, Nigeria have stormed the Lagos State House of Assembly to protest the demolition of their houses by the Nigeria Police Force.

The police had in December demolished over 1,000 houses at Mowo Phase II on the order of the Inspector General of Police. The police claimed they acquired the property measured 65 hectares of land (960 plots) from the Lagos State Government and got the C of O from the government in 2008.

The police also claimed that residents built their houses on the land illegally and that the police wanted to develop the property to an estate for top echelons of its members.

Residents said the police wrongfully demolished their houses as they bought their land from authentic sources, but none of the property owners has C of O or approved building plan from the Lagos State Government.

The protesters stormed the Assembly on Friday with placards accusing the Commissioner of Police, Umar Manko of demolishing their properties illegally and called for justice.

The Chairman of the Community Development Association of the affected area, Mr. Adu  Charles, said on December 16, 2013 at about 5.30 pm, the Divisional Police Officer, DPO, of Mowo community led about 250 policemen fully armed to the area.

He said the police came with four Black Maria vehicles , 18 hilux pick-up vans and 15 bulldozers with which they began the demolition of the buildings, saying that about 1,500 houses were demolished by the police, the state Task Force and the state Ministry of Physical and Urban Development.

According to him, in 2008, state government had sold the land to one Mrs. Obembe, an Assistant Commissioner of Police, at a cost of N176 million.

House Committee Chairman on Information and Security, Olusegun Olulade appealed to the protesters not to take laws into their hands as the Assembly would look into the matter with a bid to resolving the crisis.