He said that Yuguda has not been campaigning for President Jonathan’s re-election in the state saying that the Governor is an unabashed 5th columnist in the PDP. 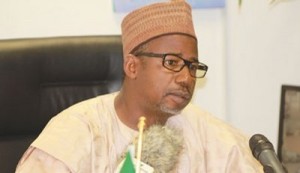 The minister who stated this in a statement by his media aide, Nosike Ugboenyi, when reacting to the recent attack on the presidential rally in Bauchi said that it was simply irrational for Governor Yuguda to allege that the Hon. Minister hired thugs to stone the people.

He said that the Governor organised the attack to embarrass him because of his rising profile, which Yuguda is not comfortable with.

The statement reads in full: “The attention of the Hon. Minister of FCT, Senator Bala Mohammed has been drawn to an allegation by the Governor of Bauchi State, Mallam Isa Yuguda that he was the sponsor of the thugs that attacked the presidential campaign team of His Excellency, President Goodluck Jonathan in Bauchi on Thursday 22nd January, 2015.

“It is simply irrational for Governor Yuguda to allege that the Hon. Minister hired thugs to stone and embarrass himself (Hon. Minister) while addressing the presidential rally in his home state. By this claim Yuguda has proven correct the allegation that he has been hobnobbing with the APC at night and running with the PDP in daytime.

“The question that the Governor must answer quickly without equivocation is: why did the thugs not stone him (Yuguda) whilst he was addressing the same rally, on the same podium and on the same day? Yugudu should also tell the world why he has suddenly turned into an APC spokesman, by exonerating the opposition party of culpability in the attack of the PDP presidential campaign team in Bauchi.

“Many Nigerians still remember recent media reports that Yuguda is the real godfather and sponsor of the APC gubernatorial candidate in Bauchi state and that he has not been campaigning for President Jonathan’s re-election in the state. Again, History is there to expose the Governor as an unabashed 5th columnist in the PDP.

“On Thursday, 22nd January 2015, those who are conversant with the negative trend of Bauchi politics since the Yuguda era were not surprised when the FCT Minister paid another price for supporting President Goodluck Jonathan. Sen. Bala Mohammed was stoned and assaulted by political thugs while he was on stage passionately addressing the PDP presidential campaign rally.

“Those behind the attack on Bala Mohammed clearly are those who do not want his star or that of the President to shine. Unfortunately for them they are too late on that mission!

“All that said and done, the minister has no apology whatsoever for consistently supporting his principal, Dr. Goddluck Ebele Jonathan. He supports him because he believes in Nigeria’s oneness and peace as well as the Transformation Agenda of his Administration. The Hon. Minister will never be deterred by attacks on his person and/or malicious fabrications by selfish, mischievous and insincere politicians.”

Governor Yuguda, a PDP governor had blamed the FCT Minister Bala Mohammed of being responsible for the attack on the president’s  campaign convoy.

“I’m sure and let the world know that the people who did this thing were PDP members and those politicians in Abuja were the ones behind it; they were not APC members. They found these youths on the road and gave them brooms and they instructed them that when the President was passing they should raise the brooms and pelt them at him.” the governor stated this on BBC hausa service.