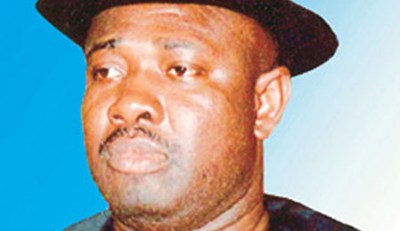 (AFRICAN EXAMINER) – The immediate past Minister of State for Agriculture and Rural Development and a frontline All Progressive Congress (APC) gubernatorial aspirant in Bayelsa State, Senator Heineken Lokpobiri, has congratulated Chief Timipre Sylva over his ministerial nomination to represent Bayelsa State in the Federal Execution Council.

Lokpobiri in a personal message to Sylva immediately after the announcement said, “Congratulations Your Excellency on your appointment and I wish you the best of luck in your new position as Minister of the Federal Republic.”

In a statement issued on Tuesday by his Special Adviser on Media, George Oji, the former Minister described Sylva’s appointment as “very well deserved.”

Lokpobiri said with this development, Bayelsa APC is further positioned to wrestle power from the ruling People’s Democratic Party (PDP) in the state.

Lokpobiri who is the only APC gubernatorial aspirant that has collected forms so far from Bayelsa State is very optimistic that the November 16, 2019 gubernatorial election in the State will go the way of APC.

He noted that Sylva’s appointment is a clear indication that, “our party is growing and making great progress.”

Lokpobiri, who was two times senator representing Bayelsa West and a former Speaker of the Bayelsa State House of Assembly has been of the position that the best process to choose a credible candidate for the primaries is the adoption of indirect primaries.

According to him, having weighed options for primary elections in the party, many stakeholders in APC believed that indirect method was better to avoid unnecessary acrimony.

The former minister has consistently dispelled insinuations that he and the former governor Sylva are at loggerheads.

Last week in Abuja when he collected his nomination forms at the party’s national headquarters, Lokopobiri used the occasion to address the issue.

“The only way to avoid a disagreement that will arise from a primary is to conduct a credible and transparent primary. That is why in the wisdom of majority of the party, we are saying that indirect primary is the way to go.

“What determines the failures and success of any party in an election is the quality of the candidate. If you have the highest quality of candidate, you have won the election by 50 per cent, but if you bring a candidate with a lot of questionable issues then, you fail in the election.

“We have had the experience some years ago and we don’t want a repeat. We want a situation where APC will be able to present the best person that can help the party to win. I don’t have any personal problem with Sylva and I know he doesn’t have any problem with me.

”Few days ago, we were together and we had handshakes. But in politics particularly in the social media, you read a lot of stories. I believe that majority of the people in Bayelsa will support my candidature if I eventually emerge.” Lokpobiri said.