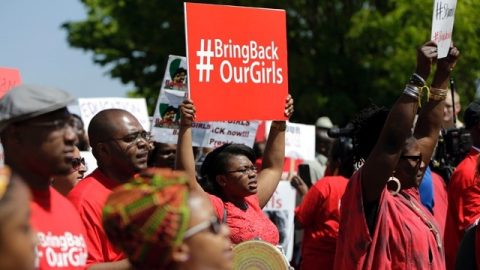 ABUJA, NIGERIA (AFRICAN EXAMINER) – The Coalition of BringBackOurGirls (BBOG) for the third time has staged another protest in Abuja to protest against delay in freedom for the abducted Chibok secondary school girls.

The group during the protest, again did not gain entrance into the Presidential Villa, Abuja.

It would be recalled that the last two protests by members of BBOG had suffered similar fate. The last protest held last Tuesday, while the first took place about a month ago.

The protest took another twist last week Tuesday, when BBOG members sealed up their lips and occupied road that link to the Presidential Villa, as they were stopped from gaining entrance.

BBOG is protesting alleged laxity on the part of Federal Government (FG) in ensuring safety return for over 200 abducted Chibok secondary school girls.

The members in the failed protest last week accused President Muhammadu Buhari of not putting in much effort on freedom for the girls and against reneging on his promise to ensure their freedom less than a year after his assumption to power.

Following the experience of the first and third protest, the Abuja Police Command in a statement issued by its Police Public Relations Officer, Anjuguri Manzah, warned last night, that it would not allow protest without due approval.

The statement complained that protest carried out by BBOG in recent times in FCT had affected traffic as well as created tension.

Manzah argued that the actions which were carried out in “disorderly and sometimes riotous manner” created unwarranted tension and apprehension among law abiding citizens and in the process, “obstruct legitimate business activities.”