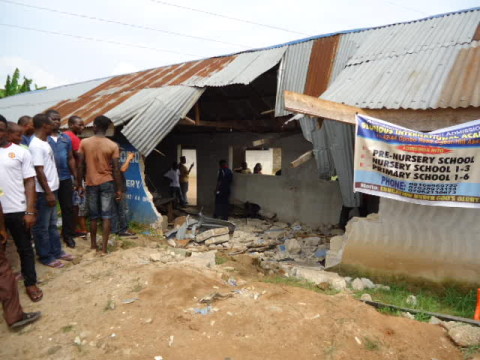 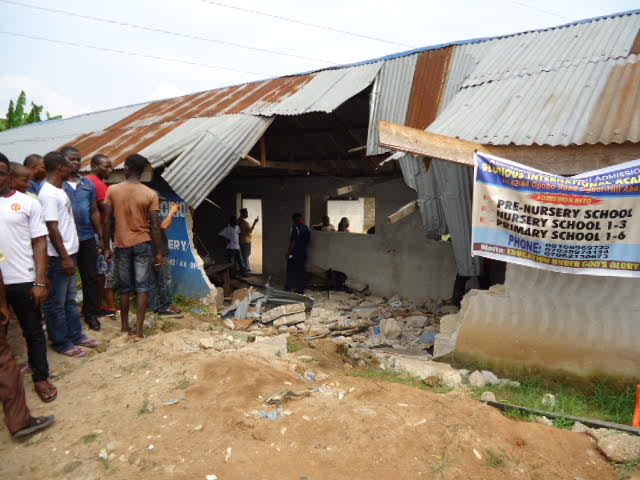 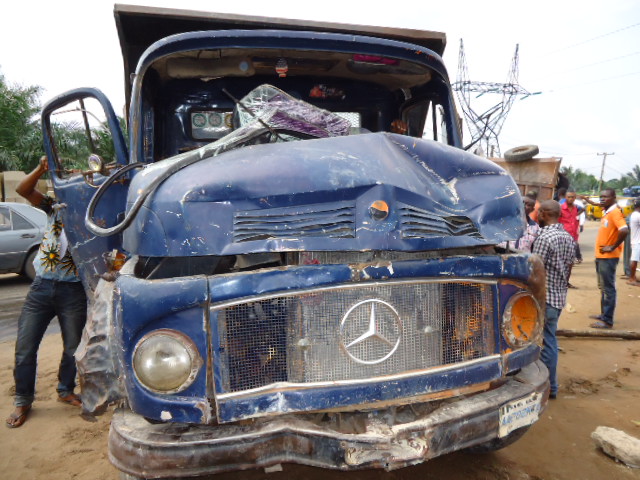 The Glorious International Academy, a private nursery and primary school, located at No 44, Opobo road, Ogbor Hill area of Aba, commercial city of Abia state, was thrown into confusion and mourning Friday as a truck lost control and broke into a classroom, killing eight school children, while twenty others sustained various degrees of injuries. 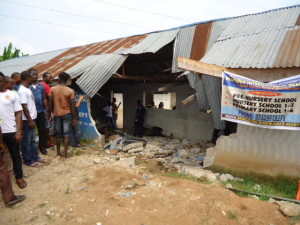 Pupils of the private school, who have concluded their examinations, were said to have gathered for a morning devotion as part of event that will be followed by the end of year party to be held later in the day, when the truck with Reg. no: Akwa Ibom AA 702 KTA on its way to carry sand rammed into the fence of the school.

An eyewitness told African Examiner correspondent that, “The pupils have concluded their examinations and returned to the school to have their end of the year party today, when a Tipper truck just broke into this school during their morning devotion.

“I came here to know if my niece in the Nursery section was involved, but thank God, she is safe. I saw about 8 of them dead. Most of them were badly injured; I don’t know how the driver could not direct the truck to the other side only to kill these innocent children.” He exclaimed.

However, when African Examiner visited the scene, policemen from the Azuka Division led by its Divisional Police Officer DPO, Helen Nze, and men of the Federal Road Safety Corps, FRSC, were seen taking notes while sympathizers clustered in groups discussing about the disaster. 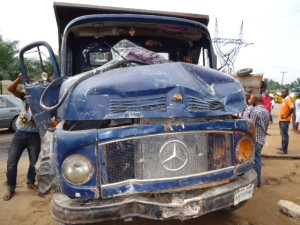 It was observed that the classroom which was connected to fence and broken  by the truck was filled with blood, broken chairs, desks, packets, biscuits, plates and clothes which may have been gathered for the end of the year party.

Some parents and relations who have their wards in the school were seen wailing uncontrollably, throwing themselves on the ground and calling the names of their children while others made inquiries if their wards were among those in the hospital or morgue.

Our correspondent also gathered that the pupils whose conditions are critical are presently receiving medical attention at an undisclosed hospital in the Aba, while others not affected were sent home.

Efforts by our correspondent to speak with any of the school teacher did not yield any fruit, as none of them was disposed to make any comment.

Meanwhile, some sympathizers were seen engaging themselves in a heated argument over the location of the affected classroom which was constructed from the fence.

While some blamed the accident on the classroom proximity to the road, others heaped the blame on the driver of the truck, whom they accused of being  careless.