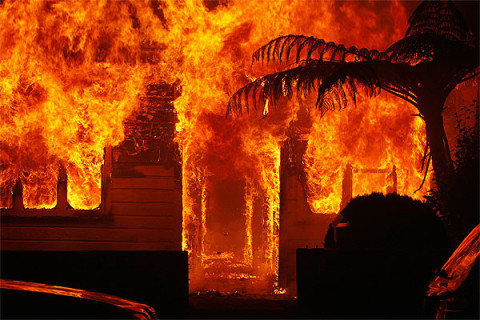 Tragedy struck on Saturday in Warri, Delta state, as the Pastor in charge of Otumara  parish of Christ Apostolic  Church (CAC), John Kayode, lost his wife and four children to a midnight inferno which destroyed part of the main church building and property valued several millions of naira.

Sources said bodies of the victims were burnt beyond recognition. 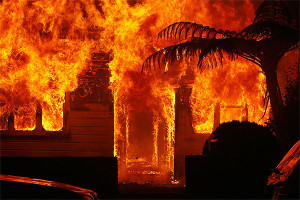 According to an eye witness, who identifies himself as Bright, all rescue efforts by those who came early enough to the scene were fruitless due to the iron protectors on the door at the scene of the incident  at Emiko Close, Angle park.

“Last night at about 11pm, some men were going around, it was like they noticed there was light problem, they were like trying to trace where the fault could have come from.

“On the long run, they came like three times and since they couldn’t get where the fault was coming from, they left. Bright said.

‘’At about 12:30am, I heard the woman screaming for help, so we came out. When I got there, I saw the last daughter of the pastor, standing very close to the window, banging on them. There was no way I could help, I saw one rubber out there with which I started scooping water to put out the fire.

“Later on, I saw the woman (pastor’s wife), struggling with the door, like a middle wooden door, she was shouting for help while she was trying to open it.

“The three other children could not be seen struggling at all, it was like they had been choked with the smoke in the house because where they slept was where we found them.

“It took like one hour before one man called fire fighters, because it was midnight and we were all shouting and trying to see how to rescue them.

“It took another one hour before the fire fighters came. By this time, the woman had died, even the little girl. The little girl was found dead close to the window because she was just there banging, but there was no way we could help.

“The windows and the doors were all guarded with protectors, it was difficult to go through, if not we would have broken through to rescue them.

“It took about another fifteen minutes after I came out and we couldn’t hear their voices again” Bright stated.

Also speaking with reporters, a member of the church, Mrs. Margeret Ichibo, said “I left the Church after prayers with her, that was in the day. I rushed back few minutes to 1a.m., and fire fighters were just labouring to break in, but it was too late.

“National Emergency Management Agency, NEMA, personnel tried to evacuate the bodies, but we advised that police be informed first.

“By the time police came, NEMA had switched off their phones. It took the courage of youths in the neighbourhood and some of the fire service to bring out the bodies between 5 and 6a.m.

“The bodies have been deposited at the Warri Central Hospital Mortuary.” he said

Efforts to speak with the pastor failed as he was said to have travelled outside the state.