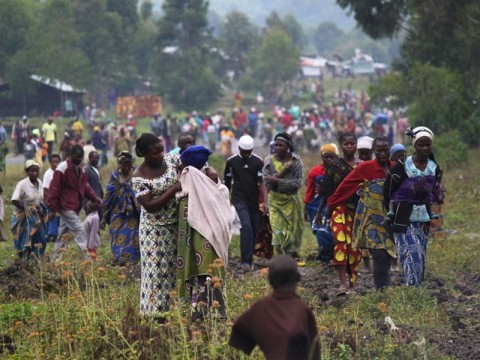 Since the raging insurgency which has been linked to Boko Haram in the North – Eastern Nigeria started, it has been reported that an average of 1,000 Nigerian refugees regularly, on weekly basis are crossing into neighbouring Niger Republic, seeking refuge in the region where the International Rescue Committee (IRC) is giving aids to thousands of fleeing residents of the zonal states.

African Examiner source – News Express reported that a post on IRC’s official website said: “Refugees have been flowing into neighbouring countries, where borders exist only and each person has a harrowing tale of escape, a heartbreaking story of loss from which few will likely recover. IRC estimated that of the weekly huge figure that crosses into Niger’s Diffa region four out of every five are women and girls. Following this, The IRC predicts that if the violence continues in northern Nigeria, up to 100,000 Nigerian refugees could be living in Diffa by the end of the year.”

Meanwhile, Boko Haram insurgents who kidnapped 30 women near Chibok, Borno State, where over 200 schoolgirls were kidnapped on April 14, have demanded cows as ransom, according to a Reuters report. This has however given impression that the terrorists may be facing severe food crisis.

Villagers from Chibok told Reuters yesterday that they had met nomads fleeing last week’s raids by Nigerian troops who told them the kidnappers were demanding cattle in exchange for the women.

One of them reported that the insurgents held the men at gunpoint and moved them from hut to another, hence, apprehended the women.

“The abductors told them to bring a ransom of cows,” said a farmer identified as Yakub Chibok. Police and army spokesmen have however said they could not confirm the accounts that women were taken last Thursday in areas outside Chibok.

However, according to officials, the nomadic settlements affected by the abductions included Bakin Kogi, Garkin Fulani and Rigar Hardo. Recounting how the women were kidnapped in Hospital, a resident, Alhaji Tar, said the gunmen arrived at Garkin- a Fulani settlement at noon last Thursday and forced the women into their vehicles at gunpoint. He added that the gunmen drove away to an unknown location in the remote stretch of Borno State.

Tar added that the group also took three young men who tried to stop the kidnapping. “We tried to go after them when the news got to us about three hours later, but the vehicles we have could not go far…”

Despite President Goodluck Jonathan’s request for external assistance from US and Britain among others, to help seek freedom for the Chibok girls, no significant and concrete achievement has been recorded yet. Instead, the insurgency is getting worst daily.

The Federal Government and military have said they were doing all they could to free the abducted girls. Meanwhile, there have been conflicting information and signals from the Federal government officials with respect to either dialogue or granting amnesty to the terrorist, which is another factor analysts argue portray government as lacking coordinated strategy to tackle the insurgents and unfortunately emboldened them, hence strike in different and ferocious dimension.