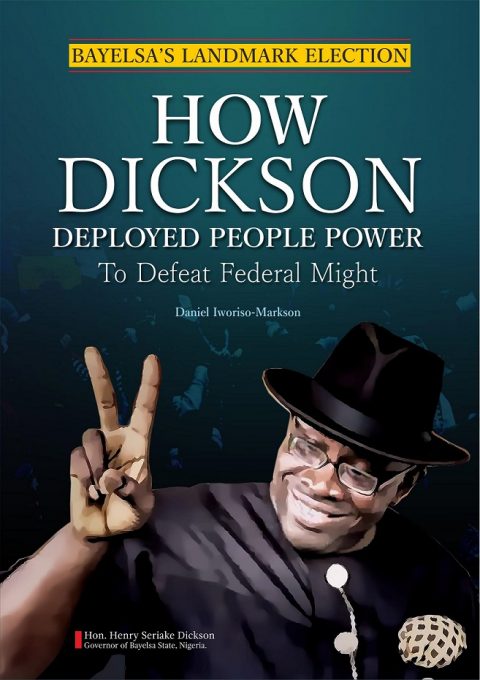 In this interview, he speaks on his newly published book: Bayelsa’s Landmark Election: How Dickson Deployed People Power To Defeat Federal Might, and the governor’s administration, among other issues. He spoke with The New Telegraph.

You recently published a book titled: Bayelsa’s Landmark Election: How Dickson Deployed People Power To Defeat Federal Might. What prompted the book?

By February 14, which is less than six weeks away, the Restoration Government will be marking its one year in office in the second term of Hon. Henry Seriake Dickson as governor of Bayelsa State.

Since he first contested and won the governorship election in 2012, I have been an active participant and close watcher of events, especially the politics of Bayelsa State.

My appointment by Governor Dickson as his Chief Press Secretary only exposed me to greater understanding of the dynamics shaping the politics of the state, which regrettably were to underscore the complex web of intrigues which characterised his reelection in 2016.

As part of the activities lined up to commemorate the anniversary celebration, I have endeavoured to write this book to promote democracy in the country because as the reader would also discover, and corroborated by Governor Dickson convincingly, what took place in Bayelsa was more than an election; it was war.

You will recall that the governor had said after his victory that ‘this election that brought me back for the second term was not just an election. It was more than an election and more like warfare. Getting through it was actually like surviving a war.

We were against a full display of the totality of power at the centre, deployed to the fullest. All elements of national power were displayed to take over Bayelsa by force and my opponent’s campaign was appropriately nicknamed ‘Operation Takeover Bayelsa.’ He called it a ‘takeover mission,’ a tag that appeared innocent at first but in retrospect, we now understand what it meant from day one.

This book is a definitive account of an election where the leadership in government at the centre and its candidate acted out a script that transformed a mere election into a warfare and perpetrated acts of violence against public morality, violation of human rights, kidnapping, shooting, maiming and intimidation under the rubrics of elections.

The ‘Operation Take Over’ slogan of the Federal Government-backed candidate was put to real action but scuttled by the greater will of the people. Before the election, there were reports that the All Progressives Congress (APC) in Bayelsa State was stockpiling weapons to perpetrate violence during the election, but little was done to tackle this concern.

Thus the true account of what happened in the 2016 Bayelsa governorship election and the sordid interplay of some ‘dark forces’ which conspired to make it so painful to us as Nigerians are what is presented in the book for history and posterity.

What are the key lessons you want the public to take away from the book?

Basically, it is to show how the people could help themselves to reject political imposition by being active in the defence of their votes as Bayelsans did by even throwing their bare bodies to challenge armoured tanks on the day of election when it was clear that the army of occupation were desperate to rig the election. Let me state very clearly that democracy is very much on trial across board and it is our collective responsibility as active and patriotic citizens to save the situation because the development of the nation’s democracy has an important relationship with our economic development. Hence, democracy must be given a chance to survive and really flourish.

Likewise, the state must as a matter of fact survive without which there can be no democracy.

As we have seen in the Bayelsa election and even most recently, the Rivers re-run national and state assembly elections, what is clear to the unbiased observer is that the conscious attempt to rig elections caused such unscrupulous activities that resulted into the mayhem in the state. We were helplessly shocked to see such loss of lives and property. But this shouldn’t have been the case in a democracy.

It is an issue which hopefully will continue to be reflected upon by all concerned because of its implication in the advancement of our democracy and mutual co-existence as a people.

This is why we must never allow its recurrence in any part of the country. It is a challenge to our moral and spiritual beings that we as a people should not be involved in this kind of cruel action which was so dehumanizing and unjust against our fellow human beings all in the name of politics. But politics itself is an act meant to serve and not to kill and destroy.

Thus as a civilized act of engagement, it craves for superiority of argument in a peaceful atmosphere and driven by sane and honourable people who are fired into participation because of the common good. This is the irony of our democracy which is bastardised by the elite that only seeks to maintain the interest of the few in society.

Having won the governorship election against all odds, how is the governor settling down to deal with the challenges of governance in an economy that is in recession?

If I get you correctly, the thrust of your question is: Election has now been won and lost but what next? Interestingly, this point was captured in the book. But it is important that we properly situate the philosophical underpinning of the election that Dickson ran on a promise in 2012 but ran on concrete achievement in 2015. His signature projects are everywhere.

In fact, if he decided not to run again in the last election, he could actually say he had already put his footprint on the sands of time in Bayelsa State. Recession or no recession, Governor Dickson is intent on making a difference.

Indeed, he has made such a huge difference in the last four years and it was on the strength of his very impressive and remarkable performance in office in his first term that made Bayelsans to return him back to office for the second time.

You will recall that while presenting his case for re-election, the governor’s focus had been on the need for continuity of his vision for the state.

This takes the form of uninterrupted development in infrastructure, particularly opening up the state through connecting those inaccessible but important locations by roads and bridges.

Thus, he hoped to enhance commerce and civilisation, manpowerdevelopment through his free and compulsory education, scholarships, health, job creation and the very broad plans for the diversification of the state’s economy.

His focal points were such ambitious projects like the Agge Deep Seaport, constructing a road to Brass, investment in power-generation and the eco-industrial park as well as the completion of the airport, among others. He is concerned about spreading prosperity as much as possible and within a short possible period of time.

To him, nothing was impossible with the right vision, dedication and aspiration to make a difference in the lives of the people.

Apart from the book, what other plans are in place to mark the first anniversary of his second term in office?

The book is not even a major part of some of the programmes lined up to commemorate the anniversary celebration.

We simply want to take advantage of the period to introduce the book since we cannot, as it were, gloss over the myriad of telling issues and abuses that characterised the election.

Something must be done by the collective of our people to say never again shall we see such electoral oddities in any part of the country. History will not forgive us if we continue to sweep under the rug those salient issues of that election which obviously have consequence for our national stability and development. However, to answer your question, some of the plans put in place to mark the anniversary is the commissioning of completed projects.

Among the completed projects are the state archives, museum, language centre, new secretariat annexes, the very magnificent new governor’s office complex, the very impressive Government House Hospital Complex. And of course, the pharmaceutical storage and distribution centre as well as the world class Diagnostic and Forensic centre, which has since become functional, being the first of its kind in Africa.

Many won’t dispute the fact that in its first term, the Dickson-led Restoration Government has displayed strong commitment and determination to making a difference in the lives of the people by providing such massive and strategic infrastructure throughout the state. Besides the construction of roads, there are strategically-located bridges in the three senatorial districts.

Equally strategic is the construction of an airport and the emphasis on the Agge Deep Seaport.

In the estimation of Governor Dickson, the successful completion of these two projects would speed up the quest for a diversified and vibrant economy, thereby making oil just one of the sources of income for the state. The airport and seaport would jumpstart the state economy so much in terms of massive job-creation, boom in trade, leading to a huge leap in income for the state and of course a new lease of life for the people.