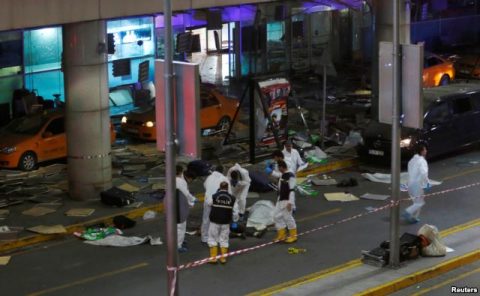 State television said one of several explosions occurred near a control point at an entry to the international arrival terminal. Witnesses said police shot at one attacker after he opened fire with what was later described as a Kalashnikov rifle. Video later showed the man blowing himself up.

There was no immediate claim of responsibility for the attack, which came as the Ankara government grapples with the twin threats of Islamist extremism and an armed Kurdish rebellion in Turkey’s southeast.

Late Tuesday, a French intelligence official told VOA that emerging details of the airport blasts matched more closely with Islamic State extremist tactics than those of Kurdish militants. The official did not elaborate.

Television showed scenes of chaos at the huge facility, Turkey’s largest airport and one of the busiest in the world. As police sought to secure the terminal, the death toll began to climb, after initial reports of 10 dead.

One witness described the scene to VOA’s Turkish service: “There were two small explosions and then a large one. People scattered everywhere. They didn’t know where to go. We were waiting for my sister, but couldn’t find her.  We’re [still] waiting.”

The attack triggered a closed session of the Turkish parliament, where opposition leaders were expected to question Justice Minister Bekir Bozdag about details of a recent U.S. travel warning for Turkey. MPs also were believed to be focusing on whether any security lapses could have contributed to the airport attack.

Istanbul has been the target of several terror attacks this year, including the June 7 car bombing of a police bus that killed 11 people.

There was no immediate claim of responsibility for that attack, either. But Kurdish rebels fighting for autonomy in Turkey’s southeast have been linked to a spate of similar attacks in recent months.

Ataturk is Turkey’s largest airport and a major transport hub for international travelers. All flights there were suspended after the attack.

Authorities later allowed incoming flights in holding patterns over the city to begin landings. All other inbound flights were diverted.

At a forum in Colorado, U.S. Secretary of State John Kerry said the Obama administration was still “trying to ascertain what happened and who did it.”

He added that “this is daily fare, and that’s why I say the first challenge we need to face is countering nonstate violent actors, for a host of reasons.”