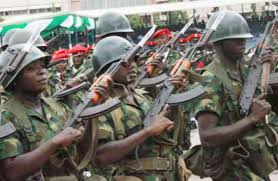 After over 48 hours of another hostage, the Nigeria’s Military has dislodged the Boko Haram insurgents and taken over Chibok, town of the abducted schoolgirls.

Our correspondent in Maiduguri, the Borno State Capital, reported that Deputy Director of Army Public Relations, Colonel Sani Usman, confirmed the development, saying the troops from the 7 Division of Nigerian Army have engaged the militants, dislodged and recaptured the town, which has been in the news for almost six months, just as the insurgents abducted over 200 girls of its secondary school, since April 14, 2014.

Some residents of the state capital who spoke with our Correspondent, confirmed the exchanges between the military and insurgents as they recapture the town.

It would be recalled Chibok was taken over last Thursday night by the Boko Haram terrorists, just after they were sent away by some vigilante groups, from another war torn town, Mubi in Adamawa State.

Gwoza is another town in Borno State, which has been taken over by the insurgents and which has been declared “Islamic Caliphate” by the controversial group leader, Abubakar Shekau, over two months ago.