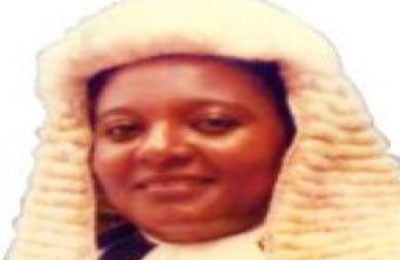 The Police in Rivers state Tuesday morning stormed the state’s High Court premises and allowed the new Chief Judge, Justice Daisy Okocha, who has been embroiled in serious controversy in the last few months, to have access to the court complex.

Sequel to the stalemate of the surrounding the appointment of the next state Chief Jurist, the Rivers state judicial workers has commenced a protest strike about four months ago.

After being led into the court complex in Lagos area of Port Harcourt, the state capital, by the heavy team of Police, Justice Okocha held meeting with other senior judges in the South-south state.

Meanwhile, the development has degenerated to violence as youths staged a protest on what they described as undue intervention and imposition.

The Police blocked major road around the court premises to prevent the protesters from moving closer. However, the arrival of the newly deployed state Police Commissioner, Dan Bature sparked more violent exchanges between the police and the youths.

The Police fired teargas and canisters at the youths who also responded with the throwing of stones, broken bottles and other harmful items at the Police.