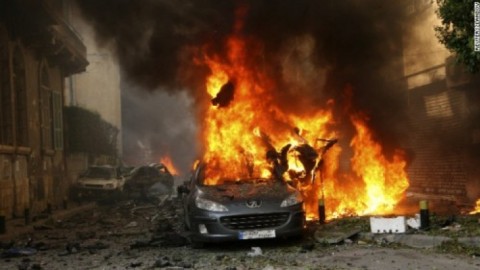 A bomb has exploded at a petrol station Monday morning in Kano.

The explosion occurred at about 10.45 am at Hotoro Quarters Round-about near an NNPC mega Petrol station along Maiduguri Road.

Frank Mba, Police Public Relations Officer in a statement stated that three people died on the spot while some 8 others were injured in the latest blast.

He said the bomber did not succeed in igniting the gas station as planned, a situation that would have clearly led to many more deaths and injuries.

“The suicide bomber and three others have been confirmed dead, eight persons are injured and rushed to the Hospital,”

“It is instructive to note that the Mega Station did not go ablaze due to the security barricade put in place by the policemen on duty at the station,” it said. “Such a situation would have clearly complicated the Emergency response.”  Mba stated

The police bomb disposal unit has arrived the scene and cordoned off the site of the blast.

In another development, a Fresh Bomb Explosion has also occured near Shoprite shopping mall close to Buhari Square in Kano.

Details of the shoprite mall soon.