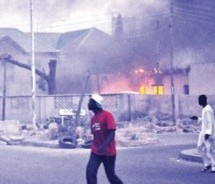 An early morning bomb blast has been reported at the ever busy Monday Market, the biggest open air marketplace in Maiduguri, the Borno State capital, North Eastern Nigeria.

Eyewitnesses informed African Examiner that the bomb erupted during early morning business activities around the popular market in the city.

As at the time of filing this report, the blast causalities were yet to be ascertained. However, the security teams AE learnt have arrived the scene to take control of the situation.

In the main time, a state government official has confirmed the blast, explaining that the losses in the blast less than 72 hours to last Friday night Bauchi  bombing, was huge, yet added the security and other emergency teams were working to take care of the victims and avert further havoc. No one has claimed responsibility for the new blast.

The explosion African Examiner learnt was heard at about 8.20 am Tuesday, at the popular Maiduguri market also very close to the Power Holding Company(PHCN) premises.

Casualties still unknown but eyewitness account maintained it was much.

Similarly, an officer of the State Security Service (SSS) has confirmed the blast, coming barely four days into the Muslim annual Ramadan fasting which commenced last Saturday. Emergency workers are yet to arrive but our source indicated they were on their way to the scene.

Meanwhile, the security have confirmed 15 people dead in the early morning blast.