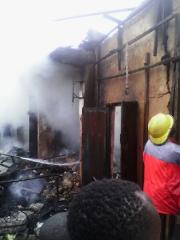 Report reaching us says Twin bomb explosions have occurred in the heart of the commercial center of Jos, Northeast Nigeria.

The explosions, believed to have been caused by an improvised Explosive Device (IED), occurred around the busy Jos Main Market, between railway terminus and the temporary site of the Jos University Teaching Hospital.

The first blast went off at about 3:10pm on Tuesday while the second erupted about 10 metres away 15 minutes later.

Sources said the explosions were followed by thick smoke and affected many shops and commercial vehicles.

Pandemonium is also reported to have ensued with cars colliding as their drivers scampered for safety.

The casualty figure is yet to be confirmed, but scores of people are reported to have died.

President Goodluck Jonathan has strongly condemned the bomb blasts in Jos, Plateau state, describing the perpetrators as cruel and evil.

He has also directed all relevant agencies to mobilise support and relief efforts in aid of the victims.

President Jonathan assured all Nigerians that government remains fully committed to winning the war against terror, adding, “this administration will not be cowed by the atrocities of enemies of human progress and civilization.”