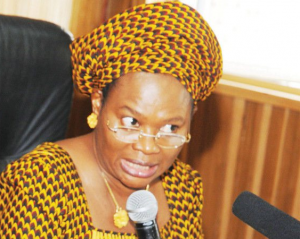 The former Director General of the National Agency for Food and Drug Administration and Control (NAFDAC) and former minister of Information Prof. Dora Nkem Akunyili is dead.

Late Akunyili has been sick for sometimes and were flown to indian where she has been receiving treatment for an undisclosed ailment.

Obi’s statement reads thus: “On behalf of the Akunyili’s family, I wish to officially confirm the death of Prof. Mrs Dora Akunyili in a Specialist Cancer Hospital in Indian this morning at 10 am, Nigerian Time, after a two-year battle with cancer.

“In spite her illness, she was unwavering in her believe in a better Nigeria that was why she defied her condition and was part of Anambra State Handover Committee and the National Conference.

“The last time I visited her in India, even when she needed all the prayers herself, she was full of concern for Chibok girls, security and other challenges facing the country and told me that she remained prayerful for the release of those girls and for God to help President Goodluck Jonathan to overcome all the challenges facing the Nation.

“She therefore urged all Nigerians to remain prayerful and committed to building a better society for our children. We all prayed together and I promised to be visiting her every month.

“We thank all those who remain fervent in prayers for her recovery and urge them to remain prayerful for the peaceful repose of her soul.”

Dora: A Symbol of Truth and Courage

As at the time late Professor Mrs Dora Nkem Akunyili was appointed the Zonal Secretary (South-east) of the Petroleum (Special) Trust Fund in 1998, Nigerian doctors gave her what many of her family members considered to be a health scare. She was then certified for a surgery operation abroad.

Aged 44 then, she then decided to travel to the United States, first to get a second opinion and then undergo the prescribed surgery. The bill for the medical trip was $17,000, including $12,000 for the surgery.

During pre-surgery check-up in the US, the doctors told her the Nigerian doctors made a wrong diagnosis and that she did not need any surgery. It was then said to be a minor issue that medication would solve.

She thanked the doctors and did the unexpected by returning the money to PTF, a tradition not common among the Nigerian government officials.

Having being informed by the demonstration of this uncommon courage, the Military Head of state then, Major Gen. Muhammadu Buhari, was very impressed and wrote the late Professor a letter of appreciation and commendation.

Akunyili Was an Amazon -Governor Amosun

In a statement by his Senior Special Assistant on media, Mrs Olufunmilayo Wakama, Amosun, who expressed shock and disbelief at the news of the demise of the one time director general of the National Agency for Food and Drug Administration and Control (NAFDAC), at the age of 59 years, said she deserves special mention among nation builders in Nigeria.

The governor said the death of the foremost Professor of Pharmacy, when her wealth of experience was mostly needed, especially at the on going National Conference, where she was a delegate, is lamentable.

Amosun recalled her achievements at NAFDAC and said she waged a successful war against counterfeit and fake drugs, thus becoming a terror to fake drugs cartels.

“Also, as minister of Information during the administration of the late President Umaru Musa Yar’adua, she did her best in promoting and projecting Nigeria when she initiated the Rebrand Nigeria Project. I remember the slogan ‘Nigeria: Good People, Great Nation’.

“Knowing her, she would have done her best, yet again to chart the way forward for Nigeria at the National Conference. She has certainly left her footprints on the sands of time,” the governor said.