Finally, Oyinlola Declares For APC As Party Rounds Off Mega Rally in Osogbo 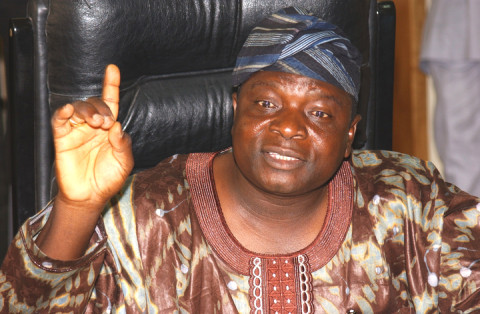 The party’s flag and its emblem, broom were handed over to him by the APC National’s Chairman, Chief John Odigie-Oyegun, after being presented by his old time friend and serving Senator, Professor Sola Adeyeye, who is representing the Osun Central Senatorial district. 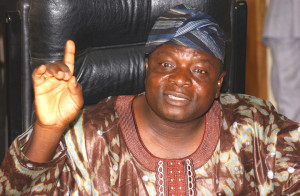 In his address at the rally in Osogbo City Stadium, Oyinlola recalled that his travail with the ruling party and President Goodluck Jonathan started when in 2011, was invited by Mr. President who then indicated interest to run for the 2011 Presidency. He revealed that he told President Jonathan that the right person to approach, was former President Olusegun, adding that they later agreed, worked and struggled together to ensure his victory in the poll held over three years ago.

Oyinlola who accused President Jonathan of marginalizing the South West in allotting key political positions, declared that PDP did not disserve Osun governorship election’s victory as he had failed to deliver on his political promises.

The former national PDP Scribe stated that the selfish and self-conceited nature of the ruling party’s flagbearer, in the Saturday’s gubernatorial poll, Senator Iyiola Omisore led to exit and massive defection of the key state party’s stalwarts to another political party, including the APC.

He hailed the incumbent Governor Rauf Aregbesola’s policy to further decentralize the state University’s (Osun State University) Faculties, saying this would promote the spirit of unity and togetherness in the state.

Former Lagos state Governor and national leader of APC, Bola Tinubu in his address at the rally, berated President Jonathan, saying he lacked good governance experience and competence to drive Nigeria to an enviable level.

He urged Osun people not be scared of Security operatives, stressing that they were kited and paid with the tax payers’ money. He queried  where were the security men posted very close to Yobe Unity College when the school was invaded early in the year, an attack which resulted into abduction and killing of over 70 students.

The former Governor indicted the Minister of State for Defence, Musiliu Obanikoro of alleged plot to kit hoodlums in Security uniforms to move around and intimidate the residents, but urged them to be undeterred.

Tinnbu faulted Jontahn – led Administration and accused it of being confused, citing example that the government has claimed to know where about of the over 200 abducted Chibok girls, yet they were still being held hostage in the bush over three months ago.

The mega rally was attended by all APC governors, National and state party leaders, legislators as well as state party members and from the neighbouring states, new decampees among of whom was former Govenor Isiaka Adeleke.