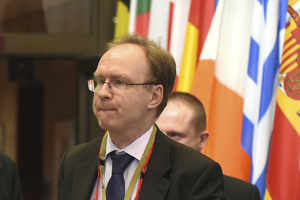 BALTIMORE, MD (AFRICAN EXAMINER) – A UK’s top diplomat in Brussels Sir Ivan Rogers, has resigned.
Rogers, who was appointed to the role of Permanent Representative by former PM David Cameron in 2013, had been expected to play a key role in Brexit talks expected to start in few months time.

The Foreign Office said it would not give reasons for Mr Rogers’ resignation at the moment.
The envoy had in the past, privately told Ministers that a UK-EU trade deal might take 10 years to finalize. He hinted them this was also the view of the other 27 member states.

The latest development suggested that there has been some failure of ‘’synchronicity” between Sir Ivan and the UK government.

Sir Ivan was due to leave his post in November but is stepping down early, the Financial Times reported.

Labour MP Hilary Benn, who chairs the Brexit select committee, raised concern, after Sir Ivan’s resignation, declaring it came at a “crucial” time, still urged the government to “get its skates on” in finding a replacement.

Meanwhile, Prime Minister Mrs. Theresa May has pleged she would trigger formal talks between the UK and the EU by March end.