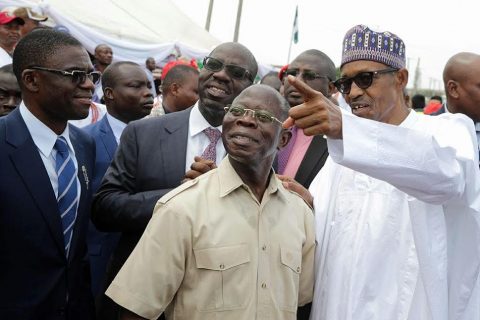 EDO, NIGERIA (AFRICAN EXAMINER) – President Muhammadu Buhari has declared he is personally satisfied with the performance of the outgoing Edo State Governor, Comrade Adams Oshiomhole, thus assured him that the ruling All Progressives Congress (APC) will saddle him with an ‘’important national assignment’’ when he leaves office.

While speaking at the Palace of the new Oba of Benin, His Royal Highness Omo N’Oba N’Edo Nku Akpolokpolo Ewuare 11, on the first of his two-day visit to Edo, President Buhari said the country would be the loser if the APC fails to utilize the people’s governor’s wisdom, skill and energy.

“It will be a pity to waste his energy by him retiring. I hope there will be a higher assignment for him to do more for the nation.

‘‘I congratulate the Governor for his hard work; Oshiomhole is a hard working Governor. We will need his services in Abuja.

‘‘Thank you for inviting me, most especially during this time in the country.

‘‘You have served two terms and you are about to leave. You deserve a place in history. I hope the APC will look for a place for you because your service for the country is far from over,’’ the President said in a statement issued by his SSA on Media and Publicity, Garba Shehu.

President Buhari also congratulated the Oba for successfully ascending the throne of his ancestors and extended the support of the Federal government to his Royal highness in his bid to improve the lives of Edo people.

The Oba in his speech expressed delight on the President’s visit, noting that it was the first since his recent coronation.

‘‘We believe this is a sign of better things to come. I appreciate your contribution to my coronation,’’ Oba Ewuare II said.

The royal father who commended the President for appointing Edo indigenes into positions in government appealed for the establishment of an export and import processing zone for agro-allied industries in the state.

He said the venture would stimulate the nation’s economy and create jobs.

After paying homage to the Oba, President Buhari commissioned the renovated Central Hospital in Benin.

The medical facility which was established in 1902 was rebuilt by the state government under Oshiomhole.

At the event, President Buhari praised the state-of-the art facility rebuilt by the Governor, noting that he had the choice of using the available money for his comfort by building a new government house but he opted for a hospital to help the people.

President Buhari also commissioned the Upper Siluko Road in Benin City, which he described as “no ordinary type of road.’’

President Buhari commended the quality of infrastructure built by the outgoing Governor, noting that the history of EDOMARUSE state will not be complete without his name.

Governor Oshiomhole will hand over to his successor, Mr. Godwin Obaseki this Saturday, November 12, 2016.