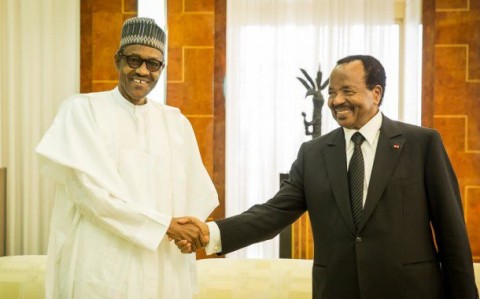 President Muhammadu Buhari and President Paul Biya have agreed to work towards the completion of the demarcation of the land border between Nigeria and Cameroon before the end of the year.

According to a communiqué issued Thursday at the conclusion of President Buhari’s official visit to Yaounde, both leaders welcomed the progress made thus far in the exercise which is being undertaken under the auspices of the United Nations.

“The two Heads of State took note of the satisfaction expressed by the United Nations Secretary-General in his most recent report on the work of the United Nations Office for West Africa from January to June 2015, regarding progress in the demarcation of the land boundary between  Cameroon and Nigeria.

“They agreed to endorse the recommendation of the United Nations  Secretary-General on the completion before the end of 2015, of the land border demarcation work, in order to concentrate on enhancing cross-border cooperation,” the communiqué read.

According to the communiqué, President Buhari and his host also endorsed the commitments made at the Extraordinary Summit of the Lake Chad Basin Commission and Benin Republic held on June 11, 2015 in Abuja.

President Buhari and President Biya agreed to strengthen security collaboration along their common border under the auspices of the Nigeria-Cameroon Trans-Border Security Committee and within the framework of the implementation of the concept of strategic operations approved at the Abuja Summit.

They  reaffirmed their determination to strengthen cooperation with other neighbouring countries for the rapid elimination of  terrorism  and other security threats.

The two Presidents thanked the United Nations, the African Union, ECOWAS, the Economic Community of Central African States and other bilateral and multilateral partners for their active solidarity in the war against Boko Haram.

They also reaffirmed their support for the implementation of the Lake Chad Basin Commission’s  Five-Year Investment Programme (2013-2017), which seeks to save Lake Chad, restore its ecosystem and promote the socio-economic development of the people living within the basin.

The two Heads of State welcomed the first meeting yesterday in Yaounde of Governors of contiguous states and regions on the Nigeria-Cameroon border and called for regular meetings of the Governors to strengthen collaboration between the two countries.

The communiqué was read by the Permanent Secretary, Ministry of Defence, Mr. Aliyu Ismaila and the Cameroonian Minister of External Relations, Pierre Mbonjo, in the presence of the two Presidents.

President Buhari has since returned to Abuja.