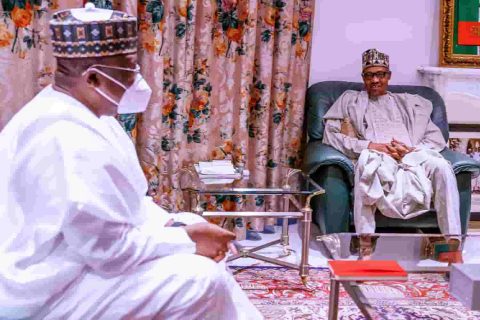 The Senior Special Assistant to the President on Media and Publicity, Malam Garba Shehu, said in a statement, that Buhari gave the warning on Thursday, at a session with leaders of the National Assembly in Abuja.

The president had met behind closed door with the Senate President, Sen. Ahmed Lawan, and the Speaker of the House of Representatives, Mr Femi Gbajabiamila, at the State House.

”Ministers and all heads of departments and agencies should at all times conduct themselves in ways that will not undermine the National Assembly as an institution, its leadership and members.”

”The president and the leaders of the National Assembly recognised and acknowledged that the executive and legislative arms of government are essential partners in the fulfillment of their mutually aligned goal of improving the lives of the Nigerian people.”

Recall that recently Minister of state for Labour, Festus Keyamo clashed with the senate over implementation of the federal government planned 774,000 special jobs across the country.