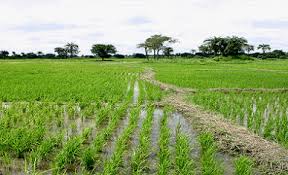 A Director in the Federal Ministry of Agriculture and Rural Development, Dr. Walia Hamman, made the disclosure Wednesday during the flag-off of the second phase of GES fertilizer distribution at Kofare Ward in Yola the State Capital.

Hamman said, “I wish to inform you that on the request of the Acting Governor, Ahmadu Fintiri, the Minister for Agriculture and Rural Development, Dr. Akinwumi Adesina graciously approved the scale up of GES in Adamawa State.

The Director who explained that, under the programme, each farmer would be given two bags of subsidized fertilizer, hoped that the gesture would result to bumper harvest.

According to him, each benefiting farmer would receive 50 percent subsidy as the Federal Government has subsidized 25 percent, while the State Government subsidized another 25 percent making the beneficiary to enjoy a total of 50 per cent subsidy.

The State’s Commissioner for Agriculture, John Elias, in his address said, the State Government had received supply of 1.2 million bags of fertilizer for this cropping season.

He warned Agro Dealers that handle the sales of subsidized fertilizer to farmers across the State against diversion, saying government would monitor the exercise and sanction anyone found wanting.

State Chairman of Agro Dealers Association, Alhaji Usman Bapullo, in his remarks said, the association has 45 centres across the State for the sale of the subsidized fertilizer to farmers.

Bapullo informed that farmers had never had it so good in the State as the development marked a milestone in the attempt by government to boost agricultural production, promising to reach out to farmers across all nooks and crannies of the State.

He appreciated government’s efforts and for the confidence reposed in them while assuring they would not disappoint the citizenry.