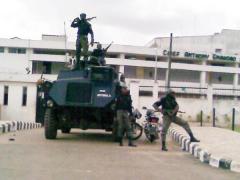 There was chaos at the Edo state House of Assembly Tuesday as nine members of the opposition Peoples Democratic Party, PDP, including the suspended Deputy Speaker, Festus Ebea  forcefully suspended the Speaker, Hon. Uyi Igbe in an impromptu and staged managed sitting.

African Examiner gathered that the opposition lawmakers, reportedly stormed the Assembly complex in a bus, broke into the Assembly Chambers which was under lock and key and announced the suspension of the Speaker.

Security men at the entrance of the Edo Assembly Tuesday

It was further gathered that a mobile union policeman was part of those who broke into the hallowed chamber of the Assembly.

Our correspondent learnt that when the PDP lawmakers stormed the Assembly Chambers, a sergeant at arms took to his heels, just as dozens of young boys who accompanied them prevented newsmen from taking any action photographs.

The sitting was said to have lasted for only five minutes and was presided over by the suspended deputy speaker Ebea.   The speaker, and six other members were purportedly suspended within the  five minutes the sitting lasted.

However, in an attempt to save his position and that of others, Speaker Igbe, had immediately stormed the chamber with the other members, immediately they got hint of the illegal action by their PDP colleagues,  leading to a heavy free for all fight. Tear-gas was however used to save the situation, as the lawmakers were seen scampering for safety.