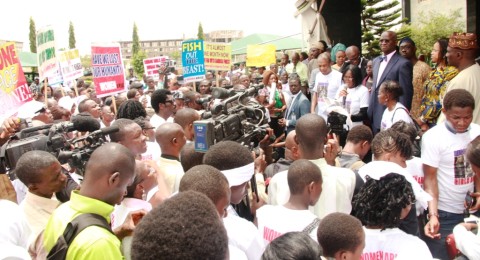 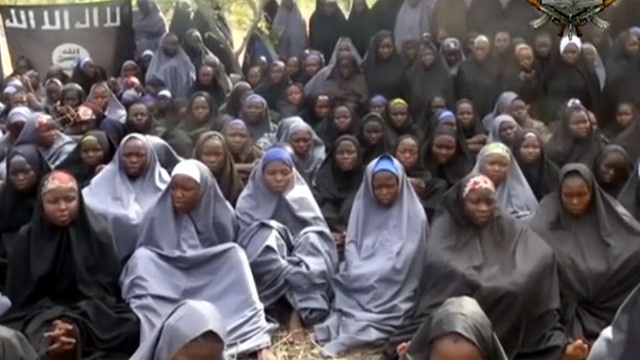 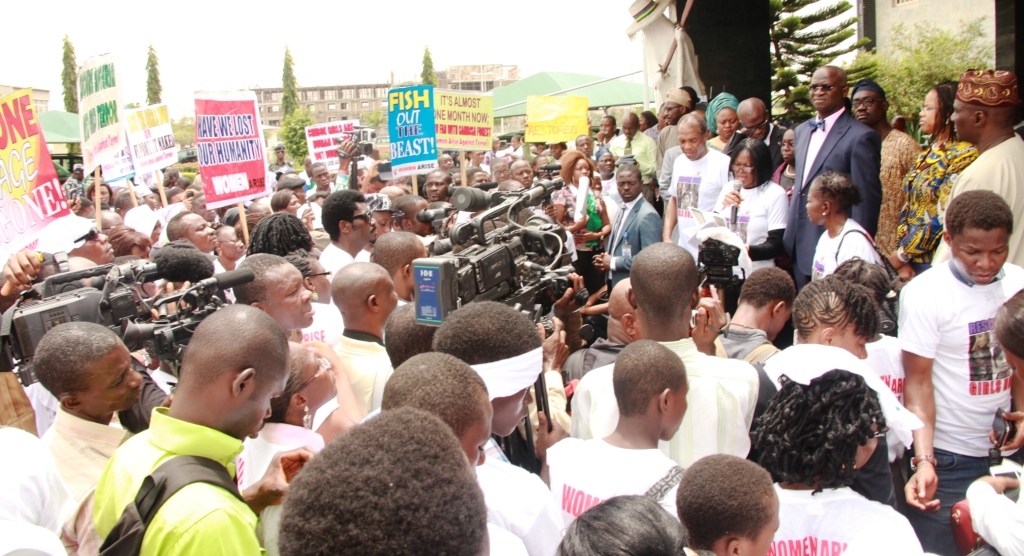 Series of massive protests have rocked the city of Lagos over the abduction of 234 school girls at Chibok in Bornu State, North Eastern Nigeria. Protesting groups demand the immediate release of the abducted girls. 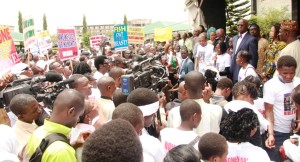 On Monday, three different groups stage massive protests to the Lagos State Governor’s Office to express their grievances over the continued holding of the girls hostage by Boko Haram, demanding that the federal government swings into action for their immediate release.

The different groups a coalition of women groups, civil society organisations, Christian Association of Nigeria (CAN) and the Victorious Army Ministries, calling for the unconditional release of the abducted children.

The first protest was staged by hundreds of women and men and was organised by Women Arise Initiative, wearing white t-shirts with the inscription, “Women Arise Against Terror.” The protesters carried a large banner, with the inscription: “Women Arise Against Terror, Shekau, find goods to sell, not our girls, enough is enough,” and marched to the governor’s office on Awolowo Way, Ikeja singing and chanting anti-Boko Haram songs.

The protesters carried various placards, some of which read: “Hunt down defilers of innocent girls,” “Fish out the terrorists,” “Stone age gone,” “Bring back our girls,” “Chibok abduction assault on humanity,” “Punish the criminals,” “Rescue the abducted girls now or we protest naked,” “Fish out the beasts,”  “NLC Women Committee says bring back our girls,” and “NLC Women Committee says Enough of Boko Haram.”

A protester, Femi Kuti said it is sad that the government took three weeks to act, saying that “the government failed. This is why we have government to deal with this kind of issue. I am here to support Women Arise in this protest. The president should stop corruption and act fast to bring back these girls and if he cannot do it, he should step down. Boko Haram is a monster that is becoming uncontrollable. Jonathan has to let the nation know what is happening in Borno State,” he said.

Ace actor, Jide Kosoko said government was not doing enough to get the girls released, adding that “they should release the children now if actually they believe in God. If government is serious about this, they should have devised ways to stop this act. We need to pray for the release of the girls.”

Convener of the protest, Dr. Joe Okei-Odumakin threatened that if the government did not do anything to rescue the girls, women would protest half-naked to the Sambisa Forest to demand for the release of the girls in 14 days time.

“It is equally horrifying that this wickedness was carried out for hours without interruption by security forces. And it is appalling to read the alleged statement credited to Amnesty International that intelligence reports were given to the security forces four hours before the incident,’ she said in the letter to the president.

“Mr. President, as mothers, sisters, fathers and brothers, we are pained that these children have remained at the mercy of terrorists with our security forces appearing hapless in the face of this grievous harm being done to our polity. We believe this is a moment for decisive leadership.

“In your last media chat, you made reference to the fact that these are trying times, not just for Nigeria, also for the world. However, we need to see you in action and not just talk the talk as demonstrated by strong and compassionate leadership in other climes,” Okei-Odumakin said.

“The Government of Nigeria must facilitate the completion of their West African Senior School Certificate Examination (WASSCE) which they were writing at the time of their capture and government must recognize them as heroines of the struggle against global terrorism and award them full scholarship to complete their education to serve as inspiration and encouragement to millions of young girls in the northern part and elsewhere in the country who are not enrolled in school or are contemplating ending their education having been terrified by this dastardly act, when they are released.

“The Government of Nigeria must bring to book the masterminds of this and every other act of terrorism in the nation. We refuse to accept that there are no security reports on the sponsors of terror in the land,” she said.

Also, CAN, Ikeja chapter, fervently interceded for the release of the abducted female students at the Conference Room of Lagos House during a visit to Governor Babatunde Fashola, who acknowledged while addressing the women groups that the abduction of 276 girls “is a very dark experience for Nigeria.”

Receiving the protesters, Fashola said the abduction of the 234 female students “must be their most harrowing moment for the parent; not knowing what happened to their daughters,” adding that the pain and aggrieved the parents and guardians “are going through can only best be imagined. I salute all the protesters who have risen up to be brothers and sister to these girls. This is how it should be. I understand your demand for information. This is usually the case when crime like this occurs.

“Regrettably, I do not have any information to share with you. But I will like you to know that when search and rescue like this is undertaken…, sometimes there may be a sense of safety in managing information more closely as the rescue operation goes on in order not to compromise the safety of the people that we are seeking to rescue.”

“Many countries have turned for greatness when they have faced dark time. The brotherhood is the sense of commitment where ethnicity and religion does not matter anymore. It is the sense that we should go forward with after Chibok. That was why I said it may yet be our most defining moment that will finally unite us and eliminate all fault lines,” he added.