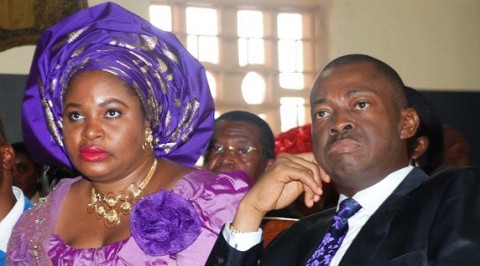 The seemingly protracted rift between Governor Sullivan Chime of Enugu state and his wife Clara,  took another twist on Sunday, as the Governor allegedly used security operatives to forcefully eject the first lady from the governors lodge to her mother residence  at the  coal city garden estate Enugu. 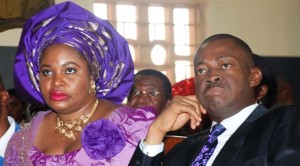 Gov. Chime and his wife Mrs Clara Chime at a function

African Examiner’s correspondent gathered that Mrs. Chime was brought to the estate which is behind CBN office, along Okpara Avenue, with a convoy of about six different vehicles with a bus filled with the woman’s personal effects.

However, a close source at the government House told African Examiner that there was a mild drama at the governor’s lodge when the security men asked Clara to enter the car stationed by her husband to take her to the Garden Estate, as she insisted on taking her four years old son along.

But after much arguments and shouting match, according to the source, the security agents over powered the Enugu first lady and took her away without the son.

It was further gathered that on getting to the estate, Clara’s mother was not found in the house and she was returned to the government house.

However, at about 6pm when our correspondent visited the estate yesterday, the main entrance gate was manned by heavily armed police men who were restricting visitor’s movement within the area.

A source at the estate told our Correspondent under condition of anonymity that nobody is in the Chime’s mother – in-law apartment, saying “we hear that” they have left Enugu for their Village Isuochi in Abia state.

The troubled Enugu first lady, had  two days ago reacted to the Human Rights Commission submission that she hallucinates insisting that she only suffered  depression, just as she asked the HRC to leave her alone as well as hands off her matter.